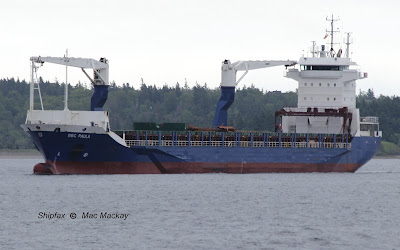 The unmistakable hull blisters identify it as one of the Carisbrooke Shipping fleet, at least originally. Construction of the ship started at the Damen Galati shipyard in Romania. The shell was then towed to the Netherlands where it was completed by Damen's Hoogezand yard in Foxhol in 2002. Named Geja-C. it was simplified to Geja C. in 2009. In 2013 it was sold to current owners HS Schiffahrts of Haren (Ems), Germany and became BBC Paula. It was placed under the commercial management of the 140 ship strong BBC Chartering fleet.

The 7511 grt, 10,618 dwt ship has removable tween decks, and hatches that can be lifted by a traveling deck gantry crane. It also has a pair of 60 tonne cargo cranes, offset on the starboard side.  Although it is more suited to break bulk cargoes, it can carry 671 nominal TEU (457 at 14 tonnes) including 60 reefers (with tween decks removed from the ship.)

If the gross and deadweight tonnages of this ship sound vaguely familiar, it may be because they are about the same as World War II era standard ships such as the Canadian Park ships: 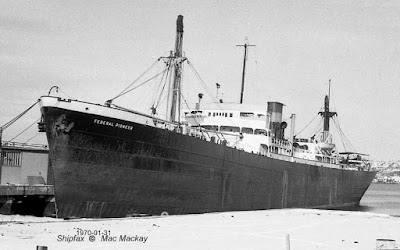 Federal Pioneer was built by United Shipyards in Montreal in 1944 as Outrement Park for the Canadian government's Park Steamship Co.  It measured 7158 grt, 10,697 dwt.
From 1946 to 1958 it operated as Brazilian Prince for Furness Canada, until it was acquired by Federal Commerce + Navigation Co Ltd. After many years of northern supply work it was finally sold in 1970 and sailed to China for scrapping. 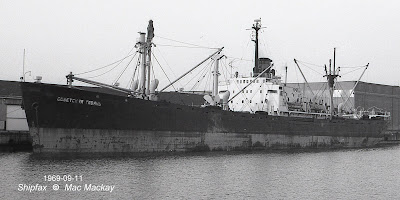 Similarly Oregon Shipbuilding Corp in Portland, OR built Samuel A. Worcester in 1943 as an EC2-S-C1 "Liberty" ship, measuring 7176 grt, 10,865 dwt. It was immediately signed over to the USSR under the Lend Lease program and renamed Sovetsakaya Gavan [a port of the Strait of Tartary on Russia's far east coast].
Remarkably, although laid up at various points after 1975, it was not scrapped until 1990 when it arrived in Bombay.

It is interesting to compare crew size and operating costs between these mid 20th century steamships and this modern day cargo hauler.