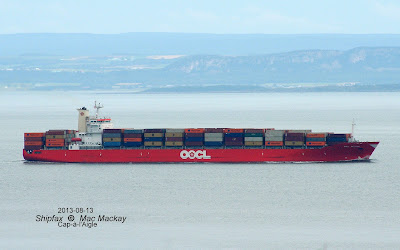 The container ship OOCL Belgium has gained something of a reputation as it plies back and forth between Europe and Montreal on the GEX1 service operated in conjunciton with MSC and Hapag-Lloyd.
In February 2013 it attempted to navigate the Strait of Belle Isle and became beset in 70cm of ice. It took icebreaker assistance to get out, and an emergency drydocking in Bremerhavern to repair prop damage.

Then in January 2014 it reportedly registered a 40 degree roll in the North Atlantic. For the sceptical, a video was posted on You Tube: https://www.youtube.com/watch?v=Vx9FmEq5D6A

On June 1, 2016 it arrived in Montreal from Montreal with ice damage. No explanation has been given as to where or how it incurred the damage, but it was apparently bad enough that the ship was removed from one complete rotation. The Offen Reederei ship Cap Harrisson has been brought in for one trip, leaving Europe June 16.

Built by Daewoo Shipbuilding and Marine Engineering Co Ltd in Okpo, South Korea in 1998, OOCL Belgium and sister ships Ottawa Express and Mississauga Express were designed broad and shallow especially for the St.Lawrence River, and LR ice class 1A for year round service.
OOCL Belgium flies the Hong Kong flag, and measures 39,174 grt, 40,972 dwt with a capacity of 2808 TEU uncluding 200 reefers.