The RoRo container ship Nolhanava returned to Halifax today [June 8] after a protracted stay in China, where an exhaust gas scrubber was installed. 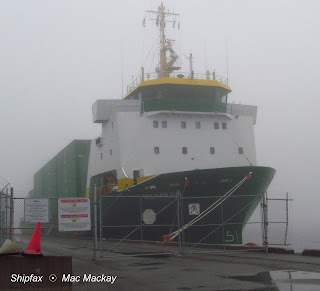 The ship tied up at pier 9B with what appears to be a full cargo of containers, all with the same Chinese markings. The ship is also sporting an elaborate new colour scheme, which is partly concealed by today's blanket of pea soup fog.

Update:
With a bit more clarity it became obvious that the markings on the containers were not Chinese! I will put it down to a combination of fog, viewing the containers from a sharp angle, and questionable eyesight. The symbol is in fact a ship's wheel, with a container slung from its top peg, and with the letters TMSI below. TMSI likely refers to some form of Transport Maritime St-Pierre International. The local agents for the St-Pierre et Miquelon route are Transport Service International. 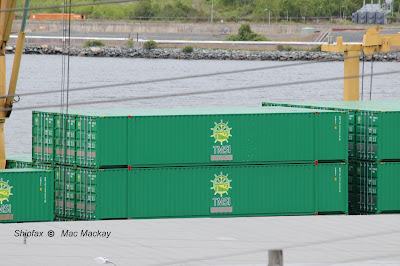 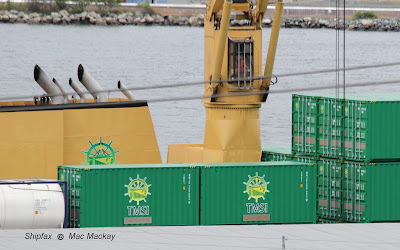 The seam between the original funnel and the housing for the extension containing the exhaust gas scrubber system is visible in this photo.

The containers, which are mostly 53 foot, but include some 20 ft boxes and tanks, carry the reporting mark MMJU, which is not listed in any references I can find. 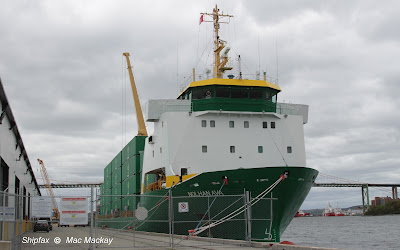 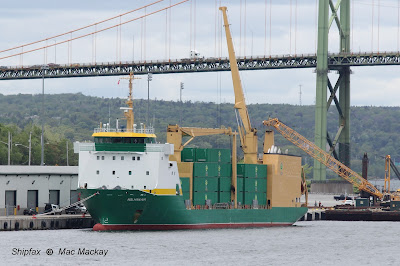 Seen more or less in the light of day, the new scheme is quite startling. (Oddly it nearly matches the colours of McNally Marine, whose crane barge Canadian Argosy is tied up just aft of Nolhanava at pier 9C.)