OOCL Washington - Halterm for a change

Ships of the G-6 Alliance normally dock at the Fairview Cove container terminal, but this afternoon OOCL Washington opted to tie p at Halterm instead. The ship was quite lightly loaded, even though there were a lot of containers on deck. 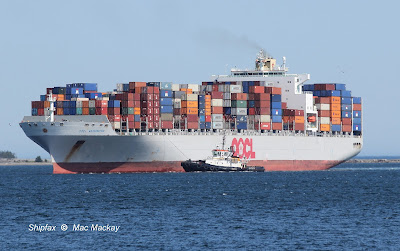 It is likely is that with deck replacement work under way on  Angus L.Macdonald bridge taking place on weekends, and with work this weekend right in the centre span area, it was wisest to remain outside the bridge. Although it was low tide when the ship arrived, and its departure at 0430 tomorrow morning will also be at close to low tide, there might not be adequate air draft clearance for the ship due to the work, or there might be hot work going on above and it would be unsafe. This could cause delays, which shipping lines do not like. 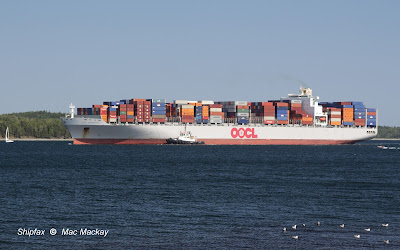 The ship is a regular now since September 2015, and was here most recently on June 9. At 89,097 grt, 99,631 dwt and 8063 TEU it is still classed as Post Panamax. However when the Panama canal's new locks open for business June 27 it will then become possible for this ship and scores of similar size and larger  vessels to pass through with ease.