Carnival Sunshine called today for the first time since her major refit in 2013. Before that she was Carnival Destiny a regular here in the early 2000s. 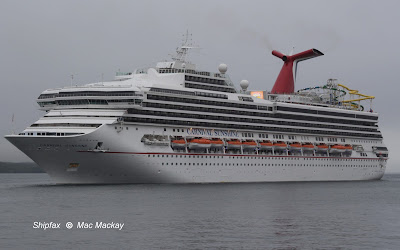 Dense fog creeps in as Carnival Sunshine gets away from pier 22 this evening.
Built in 1996 by Fincantieri Italiani, Monfalcone, it was the lead ship of the Destiny class of four. Originally with a passenger capacity of 2,642 that was increased in a 2013 refit to 3,006 although crew size remained at 1,150. The ship was much sleeker looking in its orginal form.

The refit at Trieste, the biggest in Carnival's history, cost a reputed $155 mn and involved redoing almost all of the public spaces. It also added a large water slide and some new high level spaces forward. The change was so dramatic that the ship was re-branded as Carnival Sunshine . 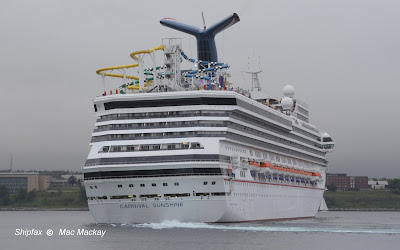 Passengers got a bit of thrill as the ship heeled over to make a very sharp turn north of George's Island. Another uncooperative pleasure sailor (just off the bow) was the cause.


The ship's sleek appearance in the first go round has been marred by the new cabins up top forward, but it is the water slide that really rankles! Oh well, it is a cruise ship.