Fairlift in Halifax - but no lift.

The heavy load carrier Fairlift made a day long visit to Halifax, but from my observation did not work any cargo. It did take on some fuel from RST (Irving) tank trucks,and there was some activity on and below decks as one of the cranes was slewed out for a time. It is likely that the crew was stowing dunnage used to secure the load. 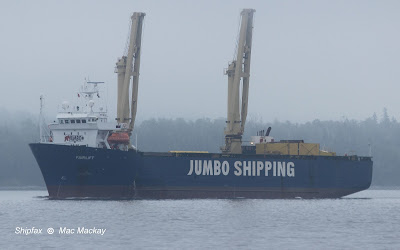 Fairlift emerges from the fog. Fog still surrounds the nature of its visit to Halifax.
My intelligence indicates that the ship may have delivered some component(s) to the drill ship Stena Icemax at the Shelburne Basin well site that was vacated when the drill ship dropped the drill riser due to a heave compensation failure. What that component could have been my sources do not say. This ship could handle some very large pierce of gear. [Of note the supplier Breaux Tide has been idle at anchor in Halifax all the time that Fairlift was reported to be with the Stena Icemax  It would normally have been shuttling back and forth to the drill ship.]

The Canada Nova Scotia Offshore Petroleum Board is still being very tight lipped about the details of the riser drop.