At Halifax Shipyard work is progressing on the construction of the first of the Arctic Offshore Patrol Vessels. Since the work is going on indoors in the shipyard's new Assembly facility it is rare to get a glimpse of any activity.

Today I was fortunate enough to see one of a pair of MAN diesel engines underway from pier 9C to the shipyard. Rigging and transport of the engines was being carried out by Anderson Haulage of Stouffville, ON. 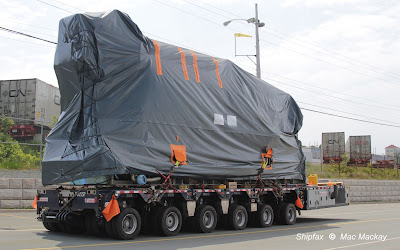 The engine is sitting on a Scheuerle motorized dolly, controlled by an operator walking behind. (The rig is moving to the left in this picture.) 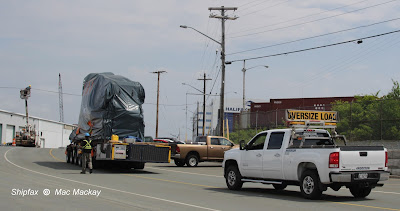 In the background the telephone wire is raised for the dolly to pass. The operator follows and there is an escort vehicle with an understated sign.