Nolhanava returns to service, and a BONUS

The much traveled Nolhanava returned to service today after a hiatus of eight months. During that time the ship has been to Nantong, China for the installation of a ceramic membrane exhaust gas scrubber system and to pick up a load of brand new containers for the St-Pierre et Miquelon service. The ship sailed October 3, 2015 via the Panama Canal and Papeete, Tahiti, arriving in Nantong December 5. On completion of the work it sailed form Nantong April 24 returning via the same route and tying up at Pier 9B on June 8.

Colorfully painted and loaded with brand new containers, Nolhanava leaves pier 9B this morning to return to service.

Nolhanava (a name made up from those of the Owner's children) was built for the Halifax to St-Pierre RoRo container service in 2000 by Santierul Naval Constanta SA in Romania as Shamrock. It arrived in Halifax for the first time January 20, 2001, but ended its service early in 2004 amid financial problems. Sold at auction to Clarke Inc, it operated a shuttle between Fort Lauderdale and the Cayman Islands until it was acquired by MG Management SAS of St-Pierre in 2015.
On April 4, 2015 it arrived in Halifax again and re-entered St-Pierre service June 6, 2015.

From October 1, 2015 the St-Pierre service was maintained by the general cargo vessel Dinkeldiep. The 4220 grt, 5646 dwt vessel, built in 2011 by Rongcheng Shipbuilding in China made its final call in Halifax when it arrived Thursday June 16. After unloading it went to anchor in Bedford Basin and sailed Friday 17 for St.John's, NL.

BONUS
And now from the Mundane to the Sublime:
What more inspiring sight could there be than Bluenose II actually sailing into Halifax on a summer afternoon. Although its engine was burping to life for docking, it was under sail and like its illustrious ancestor before it, was leaving no wake. 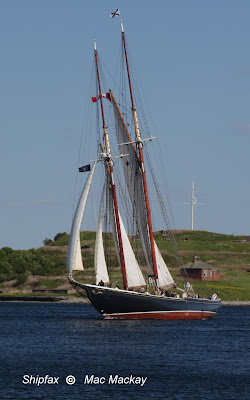 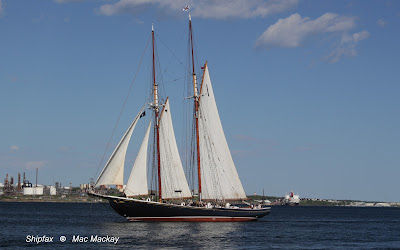 Although the "II" has a flying jib, it no longer carries topsails or a staysail, so this is as good as it gets.