It was a breezy day in Halifax harbour, and so must have presented some challenges for turning an auto carrier. However Titania pulled it off, with the help of two tugs.

The ship arrived this morning at Autoport and late this afternoon moved across harbour to unload some non-automobile RoRo cargo. 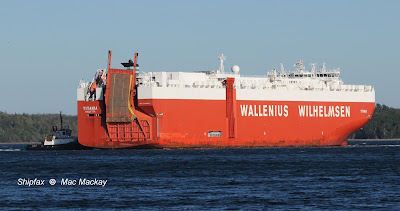 With the assistance of the tugs Atlantic Fir (5,000 bhp) and Atlantic Willow (4,500 bhp) the ship turned in number one anchorage and backed into the camber at pier 30-31.

Titania dates from 2011 when it was built by Daewoo Shipbuilding and Marine Engineering Co in Okpo. Classed as a LCTC (Large Car and Truck Carrier)  It carries 7,800 (some say 7,934) cars in its 74,255 grt, 30,907 dwt on 13 decks. It can also carry significant sized RoRo cargo thanks to some strengthened decks, some movable decks and its 320 tonne capacity stern ramp.