It was a fairly quiet weekend in the Port of Halifax, so there is not much to report on.

A first time caller, the autocarrier MSC Immacolata visited Autoport on Sunday. MSC autocarriers never visited Halifax before this year and now we have seen three.

This was one was built by STX Dalian shipyard in Wafangdian, China in 2012, and measures 59,835 grt. It is owned by Niki Shipping Co Inc of Athens and flies the Panama flag on charter to MSC.

Now a frequent caller to pier 9 with cargo for Wilson Fuels, the tanker Nanny arrived on Thursday from Come-by-Chance and sailed today. 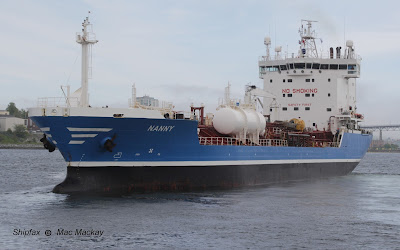 A wisp of fog creeps in with the incoming tide as the tanker gets away from pier 9. 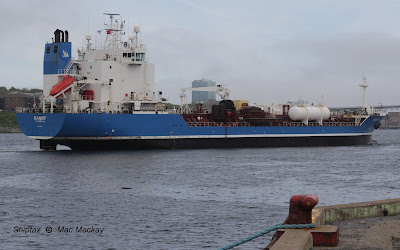 After turning off the pier it heads for Loon Bay, NL, near its home base port of Lewisporte.
Once it gets there it may meet up with the newest meber of the Coastal Shippping Ltd (Woodward Group) fleet. Sten Fjord was registered in St.John's May 24. A tanker of 8,882 grt, 13,670 dwt, it was built in 2004 by Jiangyang Shipyard in Shanghai as Falcon and was renamed in 2009 by Stenerson AS, flying the flag of Gibraltar. Coastal does not usually rename it ships, so it is likely to enter service as Sten Fjord. 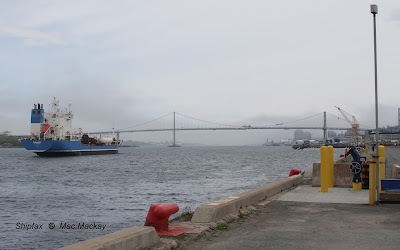 The fog came well into the harbour with the colder tidal water, silhouetting the Angus L. Macdonald bridge, where re-decking has reached mid-span. 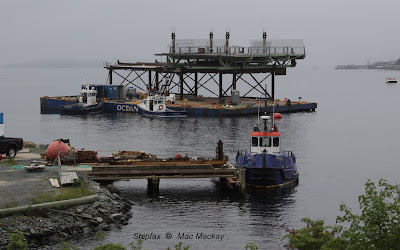 On Saturday that newest deck section was waiting on the barge Timberland, with more fog at the harbour mouth. The tugs Halifax Tugger (left) and Belle D. (right) and workboat Captain Jim are in attendance. They will move it under the bridge where the old deck section will be lowered and the new section raised in place.

Sunday also saw the arrival and sailing of the Atlantic Concert. Now down to three G3 ships, ACL's second G4 ship, Atlantic Sail will  is due tomorrow on the eastbound leg of its first trip.