Amidst the usual container ship and autocarrier movements today there were two tanker moves of interest.

British Serenity arrived only yesterday from New York. It appeared to have some cargo aboard, but was not deeply laden. Built by Hyundai Mipo, Ulsan in 2005, it has typical handysize tonnages of 29,214 grt, 47,210 dwt. It is operated by BP Shipping Ltd and wears the traditional BP funnel marking of black cap, green stripe on a white band and red base. 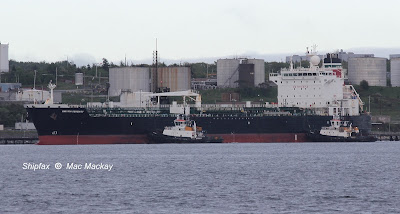 Tugs nudge British Serenity alongside Imperial Oil dock 3 yesterday evening.
It will sail this evening and will carry out a compass swing after it leaves the dock. Calibrating the compass is an important part of ship's maintenance, since compasses can become skewed due to magnetic interference on the ship. The compass adjuster, a skilled technician from shore, will compare the ship's compass to a known fixed point and prepare a revised compass card so that navigators can correct for compass error.

Anchoring for bunkers for a few hours this evening the Prince I arrived from Port Arthur, TX. It is bound for Lewisporte, NL, where it will be providing Woodward Group with fuel that will most likely be carried to northern ports during the summer months by Coastal Shipping tankers.

Algoma Dartmouth prepares to start bunkering and Chebucto Pilot has the disembarking pilot aboard.

Prince I was also built by Hyundai Mipo, Ulsan, but in 2006 and is slightly smaller at 24,996 grt, 43,158 dwt. It was built as Montenero for D'Alesio's Delmare SpA of Italy. Last year it was acquired by Gandia Shipping with Sea World Management of Monaco as managers.