Oceanex Connaigra will go back to its usual St.Lawrence River regular run after Friday's visit [June 3]. The normal Halifax / St.John's Oceanex ship, Oceanex Sanderling is due back from an extended refit in Gibraltar. Its first sailing from St.John's will be June 7, with an arrival in Halifax on June 9 and departure on June 12. It will then go on a twice weekly schedule that Connaigra has been maintaining.

Oceanex Connaigra has been making two trips a week to St.John's for most of the time it has been running to Halifax. 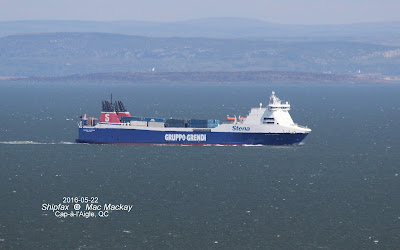 Stena Carrier trots along at 21 knots on the St.Lawrence.


Meanwhile the small cargo ship Dinkeldiep, which has been maintaining the service to St-Pierre et Miquelon for nearly a year, will soon be replaced by the regular ship on the run, Nolhanava. That ship (the former Shamrock) has been in China for the installation of an exhaust gas scrubber system. It made the long trip, via Papeete, Tahiti, both ways, and is due in Halifax June 8. 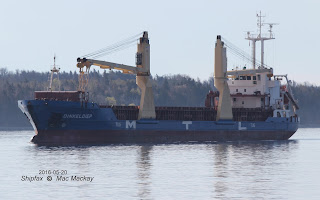 Dinkeldiep may have one trip left on the St-Pierre run.