Atlantic Erie - one for the books

The days are numbered for the self-unloading bulk carrier Atlantic Erie. Its Canadian register was closed October 5 and  CSL company markings have been painted over. It has been registered in St.Vincent and the Grenadines and will be taken in tow for the breakers in Turkey.

As built the ship had a black hull, which was typical for all CSL self-unloaders at the time.

Once a familiar sight in Halifax under two names and flags, it was also registered in Halifax for a time.
The ship was a pioneer of its type when launched November 1, 1984 by Collingwood Shipbuilding as Hon. Paul Martin. It was named for Senator Paul J.J.G. Martin (1903-1992), father of a future prime minister Paul E.P. Martin, the owner of Canada Steamship Lines. Mrs Eleanor Martin was sponsor for the ship named for her husband.


It was also built to the maximum allowable St.Lawrence Seaway dimensions of the day, and was thus the largest ship ever built by Collingwood up until then. However the ship was also built for ocean going, and after its first summer of service on the Great Lakes / St.Lawrence it arrived in Halifax September 1, 1985 and loaded gypsum for Tampa and New Orleans.

In December 1988 the ship was renamed Atlantic Erie in preparation for re-flagging to the Bahamas early in 1989 to work internationally. [Some sources say it was transferred in April, but it arrived in Halifax in February under Bahamas flag.] 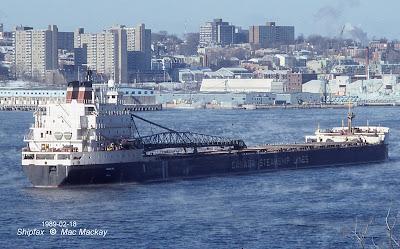 On a frigid February day in 1989, the ship had been renamed and re-flagged to Nassau. It would have to wait for warmer climes to paint out the Canada Steamship Lines banner. 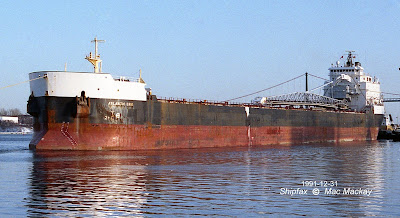 The ship continued to call in Halifax from time to time under foreign flag, but it ranged widely. 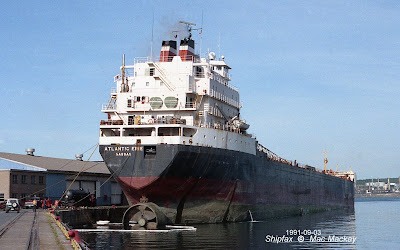 Ballasted down by the bow for prop and shaft maintenance at pier 23, the ship carries a pair of spare prop blades lashed to the house. 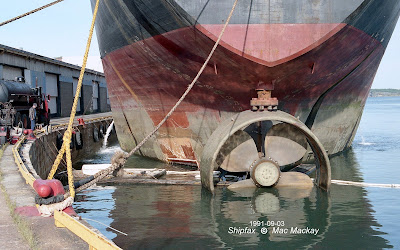 Powered by a reliable 6 cylinder Sulzer of 11,100 bhp, it had a controllable pitch prop in a steering nozzle.

Atlantic Erie worked on a CSL contract with National Gypsum until 1993 when it went to Europe ranging from Spain to the Netherlands, Germany and Norway. It returned to North American east coast gypsum work in late 1993.

Topping off the Bernhard Oldendorff in Bedford Basin was among the many duties the ship performed. The larger ship could not load to its maximum draft at the National Gypsum pier, but was able to take a full load with the top off. Both ships were in the CSL self-unloader pool.

Under foreign flag, the ship lost its white paint on the bow bulwark.

In August 1996 the ship returned to the Canadian flag and was registered in Halifax.


In May 1997 the ship arrived at the IEL dock in Dartmouth joining fleet mates Atlantic Huron and Nanticoke for modifications to its cargo handling system. The ship had been chartered to deliver rock  ballast to the Hibernia gravity base. The huge concrete structure was towed out from Newfoundland to the Grand Banks where it was settled on the bottom and was then ballasted with iron ore. The heavy ore, called magnetite, was delivered by deck mounted conveyors to the  bow of the ship where a special nozzle added water to form a slurry.

When the project was completed, the ship returned to its normal configuration. In the meantime it had reacquired the white bulwark forward and an abbreviated company banner on the side.

During its late 1998 refit at Verreault in Méchins it  took on a red hull paint - the traditional CSL colour for non-self unloaders, but which had been adopted by the whole fleet. The story I heard is that since the self-unloaders used to carry so much coal, it was difficult to keep the red paint clean. Newer, cleaner,  technology and a desire to advertise CSL caused the company to paint all its ships red.

A frequent caller in Halifax for several years, Atlantic Erie delivered cargoes of corn and coal and loaded out gypsum. It also had a major refit alongside in Dartmouth in March April 2000. It did its winter layup / self-maintenance here from December 2001 to March 2002, and several other shorter stays for work. 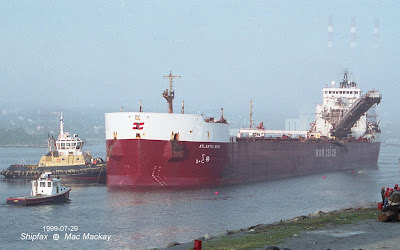 Becoming a fully fledged member of the Canadian CSL fleet again, it adopted the now standard CSL red hull colour, and carried "www.csl.ca" on its flanks - claimed to be an industry first.
Arriving at pier 9D with a cargo of coal in 1999. It repeated the performance in 2001 and 2002. 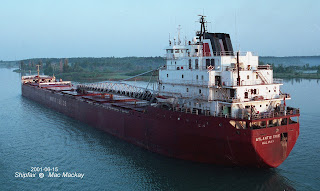 A sunrise passing in the Seaway.
Viewed from the bridge of the downbound CSLer Jean Parisien, Atlantic Erie (displaying its Halifax port of registry) is upbound in the Interpool between the Snell and Eisenhower Locks in the US Seaway. 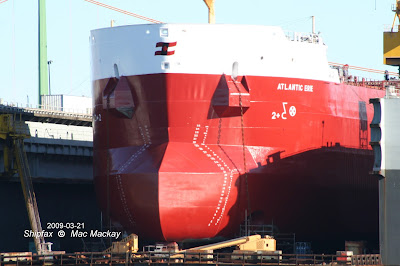 A spring paint job in the Novadock at Halifax Shipyard had the ship looking neat as a pin for the 2009 season.


A work horse for CSL it often carried heavy and difficult cargoes such as petcoke and coal. It also carried salt, which is very destructive over time.

In later years the ship spent most of its time on the St.Lawrence.

However it was not the salt cargo, but the salt port of Grande Entrée, Magdalen Island that was the undoing of the ship in the end.

On January 11, 2015 while sailing from the Mines Seleine facility it strayed from the channel and grounded.  After lightering off 5,000 tonnes of salt, it was refloated January 14 by the tugs  Beverly M. 1 and  Tim McKeil.  A survey at Sept-Iles revealed extensive bottom damage. After delivering its cargo the ship laid up in Montreal January 18 and has not sailed since.

It is expected to put to sea at the end of a tow line November 4, with the tug Pacific Hickory in the lead.  That is just a few days past its launch date of November 1 thirty-three years ago.

For more on the tug see: Tugfax