On November 29, 1986 the ferry Woodside I arrived in Dartmouth for the first time. Built to operate a new cross harbour service from Woodside on the Dartmouth shore to the Halifax terminal, it was intended to reduce car traffic in downtown Dartmouth, and to service the growing Dartmouth suburbs of Cole Harbour and Eastern Passage. A large parking lot and a bus terminal  on Mount Hope brought passengers to the new ferry terminal via a bridge over the railway tracks. 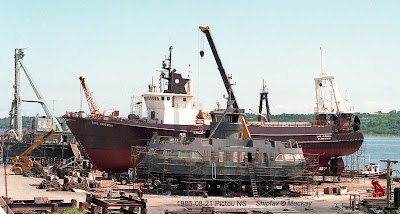 Under construction at Pictou, Woodside I shares the slips with the HMC Dockyard crane YD 253*, and the National Sea Products trawler Cape Farewell**. Off the end of the slipway is the tug Gulf Spray, now based in Halifax.

Woodside I was nearly identical to the Dartmouth III and Halifax III, built in 1979. It was also built in Pictou, NS by Pictou Industries Ltd, the successor to the Ferguson Industries Ltd shipyard. It is equipped with Voith Schneider "rudder propellers" fitted at each end, allowing for extreme manoeuvrability.
Launched ca. October 11, 1986 it  made its way to Halifax via the Canso Canal, escaping Pictou before ice set in and the Canal closed for the winter. [See fourth footnote] 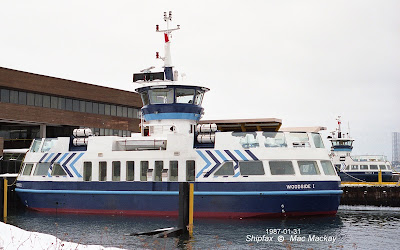 As delivered, Woodside I sported the Metro Transit chevron pattern.
Because the Woodside terminal was not due for completion until spring, the new ferry was idle until January when it went into Halifax - Dartmouth service to give the other ferries time off for maintenance.
Therefore it was not until May 2, 1987 that it actually began on its intended Woodside-Halifax run. 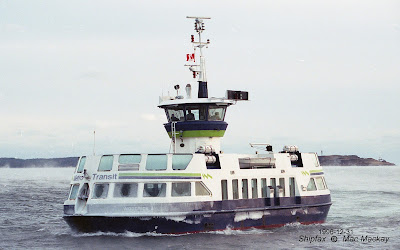 Serving in all weathers, Woodside I has had a starboard list since earliest days. Here it carries a newer Metro Transit colour scheme with a thin icing of frozen spray. It has also been fitted with a new array of radars, including a mast head scanner.
The ferry's bow is the end with the anchor, but the boat travels equally well either bow or stern first and has duplicate nav. lights.

Since 1987 it has operated on both services, since the three ferries are interchangeable. With delivery in 2015 and 2016 of the new ferries Christopher Stannix and Viola Desmond, the Woodside I has replaced the Halifax Dartmouth III which has been laid up. Another pair of new ferries is on the way, and when they are delivered Woodside I and Dartmouth Halifax III will be retired. 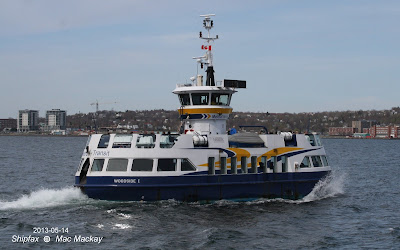 Getting away smartly from Halifax, Woodside I carries another colour scheme - since revised. 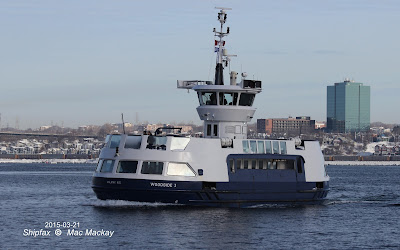 Here operating stern first, it will dock at the south side of the Halifax terminal. The passenger ramps on the starboard side (facing the camera) will be lowered when the ferry docks. Another colour scheme is in the works, but not yet applied. 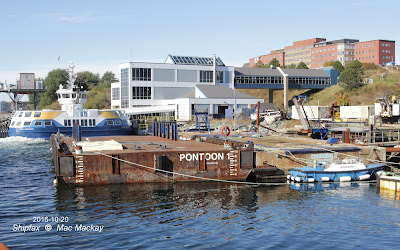 The Woodside ferry terminal bridges the rail line below the Nova Scotia Hospital on Mount Hope.
Pontoon I in the foreground started life as the Woodside ferry pontoon, built in 1986  and replaced in 2015 with a new floating landing stage.
The new ferry Viola Desmond has arrived at the terminal. It uses its propulsors at full athwartships thrust to remain alongside while passengers disembark and embark.

* YD 253 is still kicking around the Dockyard in Halifax, although its crane has not been rigged for years. I suspect that its fire tower is still considered an asset of the Dockyard fire department. Now that there is no dedicated fire tug, the crane tower could be used for high level firefighting.

** Cape Farewell was built in 1973 by Ferguson Industries Ltd in Pictou, and had just been lengthened from 49.3m to 52m when this photo was taken. In 1994 NatSea sold the trawler and it was renamed Atlantic King, and its Canadian registry was closed. In 1997 it became Orca 1 and was converted for research. In 2004 it was renamed VOS Eastwind and used as a standby safety vessel in the North Sea. It was broken up in Den Helder, Netherlands in 2007.

*** Pontoon 1 is now owned by Waterworks Construction Co Ltd, along with the concrete barge Commdive II and the mini tug Waterworks 1 (among other equipment) based next to the Woodside Terminal. The pontoon was registered as a barge May 7, 2015 and now measures 197 grt. It was previously unregistered when it was a landing stage.

Fourth Footnote:
Two sponsors christened by Woodside I at its launching in Pictou in October 1986. Mrs. Ulah Currie (née Mott) was born before the turn of the 20th century in a house which was demolished in 1909 to make room to expand the Mount Hope Asylum, now called the Nova Scotia Hospital. She was married in 1922 and her husband was one of the original workers at the Imperial Oil refinery in South Woodside, known as Imperoyal.
The other sponsor was Mrs. Hilda Robart whose husband Vernon was also an original employee at Imperoyal when it opened in 1919. Mrs. Robart had lived in Woodside for 67 years.
An article in the Halifax Chronicle Herald on October 10, 1986 concluded with this lovely sentence:
"Both women are close to the age of 90, although they won't give their exact ages."