A one time regular caller in Halifax may be on the way to the scrapyard after an engine room fire. Starting in 2011 Maersk Patras was one of the ships on Maersk's transatlantic service to Montreal and Halifax until it was replaced by a ship from partner CMA CGM in May 2104. The service is still running with three sister ships Maersk Palermo, Pembroke, and Penang. and CMA CGM charter EM Kea. 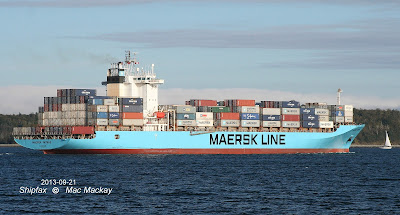 On November 1 a fire broke out in the ship's engine room while it was on a trip from Algeciras to Conakry. Although the crew extinguished the fire by sealing the engine room and pumping in CO2 there was major damage to the ship's electrical systems and generators.

The ship was only 90 miles ESE of Las Palmas and the POSH Terasea tug Salvanguard was sent to the scene and towed the ship in on November 2. Despite having no electrical power for ballasting pumps, the ship was unloaded and its 1,044 boxes including 214 reefers were landed by November 4.

Because of the ship's age and the damage, it seems likely it will now be scrapped.