When the saints come marching in

Two ships, mirror imaging each other at Imperial Oil.

Two saints were tied up at Imperial Oil today. Saints names are not as popular with ships as they once were, so it was a bit of a rare sight. Not only that the two ships were built by the same shipyard. Despite the similarity of name, ownership of the two seems not to be connected in any way.

Saint Albans Bay arrived yesterday and began to discharge at number 4 oil dock. It was built by SPP Shipbuilding CoLtd in Incheon, South Korea in 2015. It is operated by Scorpio Marine Management of Mumbai, and its commercial management is entrusted to Scorpio Commercial Management of Monaco. Both are part of Scorpio Group which includes Scorpio Tankers Inc of the Marshall Islands (where this ship is registered) with offices in Monaco and New York, which  owns 77 and charters in a further 16 product tankers.
Saint Albans Bay's tonnages are 29,735 grt, 49,990 dwt. 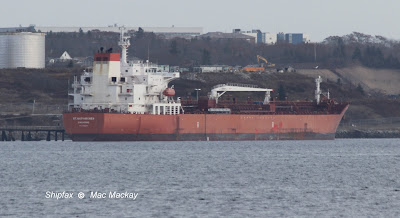 St.Katherinen arrived at number 3 dock this morning. Built in 2013 by the same yard it measures 29,656 grt, 50,269 dwt. It is operated by Maruta Industries Co Ltd [Maruta Sangyo KK] of Imabari, Japan and is registered in Singapore and flies the Singapore flag.

Also by coincidence, a third tanker, in port at Valero (Ultramar), was also built by the same shipyard but in 2016. Elandra Oak is a 29,737 grt, 49,999 dwt product tanker operated by Mansel Ltd of London, UK, flying the Marshall Islands flag.