Not the storm, but the ship, Nor' Easter blew into Halifax last evening. It is the first time this particular tanker has docked at the refurbished Irving Oil terminal in Woodside. It is also the first ship to dock bow north. Fleet mate Acadian has always tied up bow south. 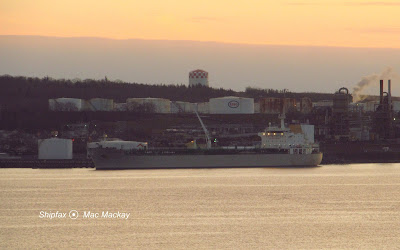 Sunrise this morning reveals the Nor'easter.

Despite the prominent Esso tank in the background , the ship is delivering Irving Oil cargo to Irving Oil tanks. Neighbouring Esso just happens to be in the line of sight from my aerie.

Nor' Easter (ii) is the recently renamed Iver Progress which has been working for Irving Oil for the past year or more under Marshall Islands flag. It replaced the East Coast (ex Nor' Easter (i)) when that ship transferred to the Canadian flag in 2014. It was renamed since there was already a Nor'easter registered in Canada.
This Nor' Easter was built in 2007 by Hyundai Mipo, Ulsan and has tonnages of 23,421 grt, 37,412 dwt. The previous ship was built in 2005.
Irving Oil has two Canadian and three Marshall Islands tankers on charter from Vroon. The latter trade internationally from Saint John to the US eastern seaboard.
Nor' Easter's last port was Ijmuiden, Netherlands, making this the second cargo Irving has brought to Halifax from overseas. The company has recently acquired a small refinery in Ireland, so we should probably expect to see more international cargoes.
I believe the reason for this arrival however, is that the ship is returning from the installation of an exhaust gas scrubber system in Gibraltar, where it was also renamed and repainted in Irving Oil colours.
Read more about that conversion process:
http://www.shiprepairers.co.uk/casestudies_35_2841245953.pdf
﻿
﻿ 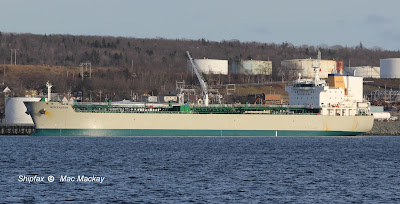 In the light of day (Saturday November 26), the ship's freshly applied Irving Oil colours still look very new. The unique hull colour has been applied to Irving tankers since the 1940s.