The first post World War II ship to be designed and built for the Department of Transport was retired in 1986 at the venerable age of 37. It is hard to believe that its successor is now 30 years old with only the faintest glimpse of a replacement on the horizon. 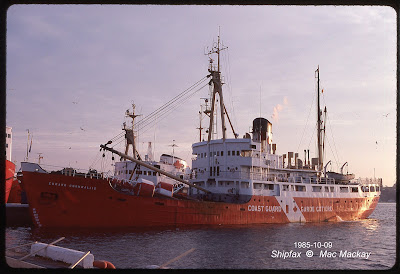 Deckloaded with Buoys CCGS Edward Cornwallis (i) at the Dartmouth Coast Guard base.
(CCGS Louis S St-Laurent and CCGS Tupper also aappear in the background)

The first Edward Cornwallis was the prototype for a whole fleet of navigation aids tenders. It was not classed as an icebreaker, although many of its descendants were, it certainly did its fair share of work in ice fior a ship that was only ice strengthened.
Its name was selected to commemorate the 200th anniversary of the founding of Halifax in 1749 by Edward Cornwallis, Nova Scotia's first governor. The man has since been discredited over his treatment of indigenous peoples and his name has become highly charged politically. A minor noble, he rose to the rank of Lieutenant General in the British army, despite a very spotty career, marked by two notable retreats both of which saw him court martialed, but exonerated.  His prior experience in suppressing the highland rebels in Scotland and at the battle of Culloden, made him no particular friend of Scots either. He went on to become governor of Gibraltar where he died. 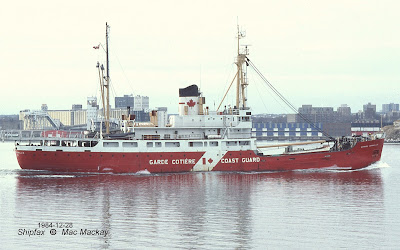 The ship named for him was built by Canadian Vickers Ltd in Montreal in 1949 and equipped with two Vickers-built uniflow-type steam engines driving twin screws.

When the replacement ship was nearing completion at Marine Industries Ltd in Sorel in May 1986, the first ship was renamed Edward so that the second could takes its name. Defendants of the choice of name claim that the second ship was named for the first, not for the governor. This is of course completely ridiculous, since there is no way of separating the two. Despite the infamy of the namesake, the second ship still carries the name.  Let's hope saner heads prevail when the next batch of navaids tenders comes along. Maybe in seven or eight years or so, just in time for the 275th anniversary of the founding of Halifax. 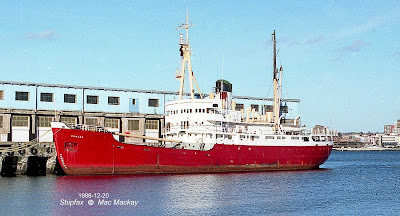 Edward was paid off on October 5, 1987 and it left Halifax in tow of the tug W.N.Twolan for Coburg, ON. After it over stayted its welcome as a nightclub, it was eventually "evicted" and in December 1993 it went off in tow to Port Maitland, ON where it was broken up.


The second ship of the name, completed in 1986 has also proven to be a fine ship, and has just recently undergone a significant refit, ensuring a good many more years of service, probably to exceed the 37 its predecessor put in. 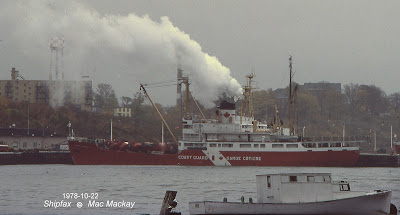 Down to her marks with a load of buoys, Edward Cornwallis vents off some excess steam.
(CCGS Labrador is partially visible behind.)
.