A ship that has been in a sort of limbo for five years will finally be scrapped this winter. The Kathryn Spirit was to be broken up at Beauharnois, QC, just below the Seaway locks in 2011. However the buyer, Groupe Saint Pierre Inc was denied permission to scrap it and the barge Jean-Raymond at that location due to environmental concerns and objections by nearby residents.


The buyer then sold the ship to a Mexican scrapper, but the tug that was sent to get it got no farther than Halifax (and is still here.)The Craig Trans has been covered in Tugfax. See: Craig Trans


As the Kathryn Spirit remained in Beauharnois until the new owner, Reciclages Ecologicos Maritimos renounced ownership earlier this year. After local pressure, authorities finally stepped in to secure the ship. Although they removed some hazardous material, it continued to fill with rain water and it began to list dangerously. It was secured some more, and a Groupe Océan scow was brought in to keep it in place. The ship is in such a deteriorated condition that it cannot be moved. 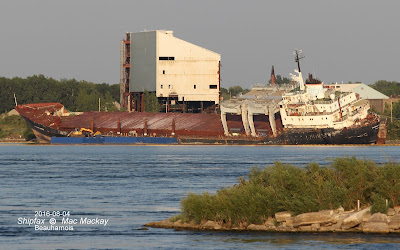 At the Beauharnois scrapyard of Groupe Saint Pierre, with a former industrial site under demolition in the background. The ship is very close to the tail race of the Beauharnois power dam, which would spread contaminants over a wide area.

Now the government has decided that they must scrap the ship in situ and will build a coffer dam around it. Once that is completed the ship will be broken up over this winter and the cofferdam removed in time for the opening of navigation in the spring.


Kathryn Spirit will be remembered in Halifax as the ship that brought the first ever domestic cargo shipped from Churchill, MB. The ship arrived September 30, 2007 with grain for Dover Mills (now P+H Milling). That ill-fated port on Hudson Bay has been closed by its owner Omnitrax and may never re-open. Grain exports were no longer sustaining the port, and the operator has also closed its reduced freight service on its rail line from The Pas to once a week. (VIA Rail still runs the Polar Bear Express three times a week)* Some of the original supplies needed to build Churchill, and its predecessor at York Factory were shipped out of Halifax in the early decades of the 20th century. * REVISION 2016-11-06

Some of the following is a repeat of my ealier post in January:
http://shipfax.blogspot.ca/2016/01/kathryn-spirit-more-trouble-for.html


Kathryn Spirit
The ship began its life in 1967 when it was delivered by Lindolmens Varv in Goteborg as Holmsund as a 9261 grt forest product carrier. It was equipped with two 20 tonne capacity traveling gantries on deck to handled baled pulp, lumber and other unwieldy cargo packages. The gantries were roofed over, allowing cargo work in rainy weather. The ship had five hatches over five box shaped holds.
In 1997 the ship was renamed Menominee by the same owners and made many trips to the Great Lakes and eastern Canada ports such as Pictou, NS. 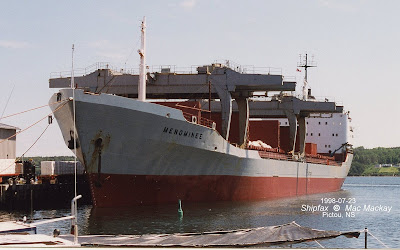 At Pictou, NS with some of its five hatches open, the gantries are positioned with their outriggers extended to load baled paper pulp.

In late 2006 McKeil Ships Ltd of Hamilton, ON bought the ship and renamed it Kathryn Spirit. Their first foray into ship owning, the tug and barge owners found work for the ship hauling aluminum out of Sept-Iles and delivering supplies to the such northern ports as Deception Bay. The fitted the ship with a big crawler crane to handle a small tug and a lightering barges. 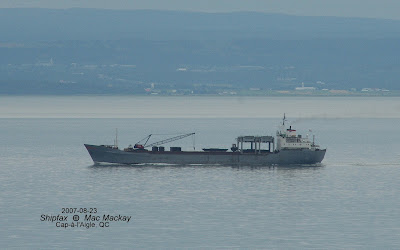 The small tug Flo-Mac and a scow sit on deck as the ship heads north with cargo. The crawler crane will handle cargo that the gantries can't manage. The ship's fine hull shape, sharp bow and spoon stern are sure signs of Swedish design. 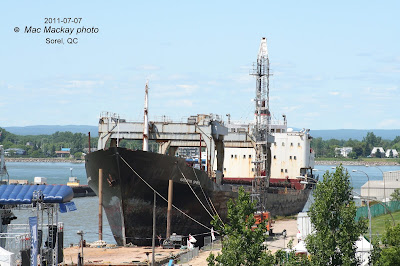 In layup at Sorel, with the crawler crane lande on the adjacent pier.

It remained in Sorel until 2011 when it was sold to Groupe Saint Pierre and towed by the tugs  Salvor and Jarret M to Beauharnois August 26, 2011.

The sale to Mexican interests took place in 2012 and the saga of the Craig Trans unfolded.

Jean-Raymond
Not mentioned in the most recent news is the barge Jean-Raymond that is tied up between the ship and the shore. It will be within the proposed coffer dam and likely will be scrapped at the same time.