Another random series of news from 1986.

A number of ships arrived in Halifax for damage repair during the year. A surprising nunber of them were standard type or series built ships:

Among the ships arriving in Halifax for repairs, was another of the many standard types of general cargo carriers built to replace World War II era standard ships. Intended as economical, low cost vessels, they were built to serve secondary trade routes for bulk and general cargo. The Greek Alkyonis was built by Ishikawajima Harima Heavy Industries of Nagoya Japan as one of the Fortune class. These ships were easily identified  by their unusual high mount 10 tonne derricks. They were designed in collaboration with the Canadian designers Algonquin International of Montreal. (now Algoship).

The ship arrived in tow of the Irving Cedar on April 8 with engine failure. It entered the Novadock floating drydock at Halifax Shipyard on April 28 and remained there until May 3. Technicians from Japan flew in to attend to the repairs to the Pielstick engine, built under license by IHI. 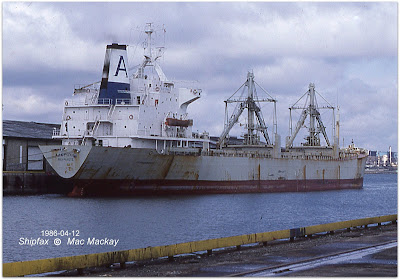 This ship was also towed in, this time by Irving Maimi, arriving January 2.  On charter to Abitibi Paper, it was en route from the Mediterranean to Newfoundland when it had a main engine failure, somewhere out in the Atlantic. Not a good place and not a good time of the year! It left again in tow of Irving Miami January 8 for New York. 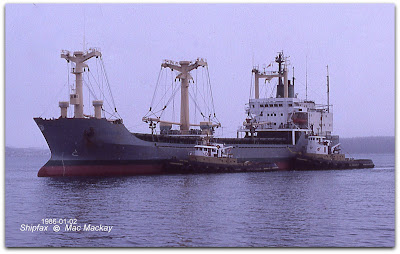 The ship was built in 1977 by Neptun VEB in Rostock, East Germany, one of large class of similar ships. Measuring 5508 grt, 7923 dwt, it carried four conventional cargo derricks of 22.5 tonnes capacity. Its Greek owners sold the ship in 1992 when it became the Ming Zhou 8, in 2008: Dong Fang 51 and in 2009: Lian Meng 16. It is reported to be in service still, owned by the Chinese government.

Another ship of the same class (an quite possibly the same owner) arrived under its own power March 31 and entered the Graving Dock. It was there until April 27 when it sailed. 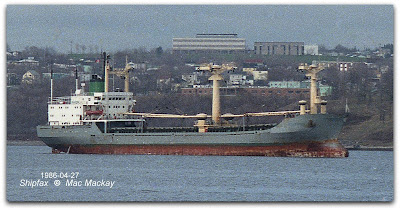 Another of the Flensburger  types [see Familiy C earlier in this series], this ship arrived April 3 with ice damage and spent a few days in the Scotiadock while it was patched up. It was able to sail April 8. 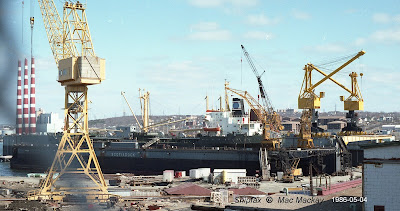 Launched as Carl Fisser it immediately went on charter to Saguenay Shippng (with several sisters ships) as Sunvreeland. In 181 it was sold to Cyprus owners as Fleur and in 1987 became Flair for Liberian owners, . In 1992 it was renamed Azimuth under Maltese flag and ended up in China in 2004 as Eastda then Dong Da. It was deleted by Lloyds in 2012 with the notation "existence in doubt".

The USSR flag ship arrived in Halifax about November 25 with a full cargo of grain, likely loaded at a St.Lawrence River port. It had damage in the area of number one hatch, and some wet cargo. The damaged cargo was offloaded at pier 26 and repairs were made to the hatch, coaming and bulwark. With the cargo dried at the grain elevator, it was reloaded and the ship was able to sail December 14. 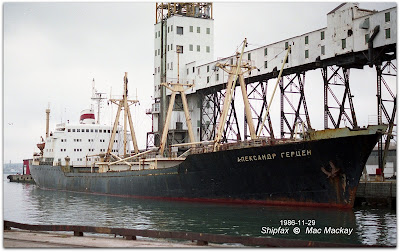 One of about thirty ships of this design built by Brodogradiliste Uljanik in Pula, Yugoslavia (now Croatia) it had the usual very good lines of Soviet ships of the 1960s. This one was built in 1966 and measured 10,109 grt, 14,130 dwt. It was equipped with bi-pod masts and  twelve 5 tonne derricks. It also had a 60 tonne jumbo derrick serving number 3 hold. The ship served its entire career with Black Sea Shipping of Odessa and arrived in Alang January 11, 1994.