It's not often that a smallest ship gets much attention, but today's arrival of Cosco Izmir is worth noting. It is the smallest ship to appear in Halifax for the Columbus loop operated by CMA CGM, UASC and Coscon. Since the line began calling in Halifax in late 2015, we have seen the record for largest container ship in Halifax set twice by that line, and every ship has been one of the (old) post-Panamax size. 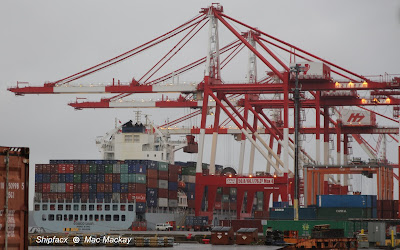 Cosco Izmir at Halterm is the smallest ship to arrive for the Columbus Loop.
It was built in 2013 by Jiangsu Yangzijiang Shipyard in Jiangyin. It is 40,465 grt, 49,952 dwt.


Cosco Izmir however is a 4256 TEU ship, which places it firmly on the endangered species of old Panamax ships, suddenly outmoded by the opening of the enlarged Panama canal in June.
According to various reports the old Panamax ships of 3,000 to 5,000 TEU have become liabilities and are being scrapped even though they only may be seven to ten years old. Of those not scrapped yet, 101 are reported to be idled for lack of work. The neo-Panamax ships, of up to 11,500 TEU are the new thing and ports around the world have begun to scramble to accommodate them - Halifax among them.

Stay tuned - Shipfax will be unveiling its master plan in the near future.


CMA CGM will taking on new partners under a new grouping called Ocean Alliance, which will include OOCL, Evergreen, and  Coscon (the merger of CSCL and Cosco). It is expected to start up in April 2017, now that it has passed the scrutiny of regulators. There has been talk than Hyundai Merchant Marine (HMM) would join this group, but that is still unsettled, but if it does it will need Chinese government approval, if not others.