Cerescorp's Fairview Cove container terminal was a busy spot for a time today. An early morning arrival of Atlantic Sail had the west end of the pier busy all morning. The late morning arrival of NYK Demeter then had the place jumping into full action. 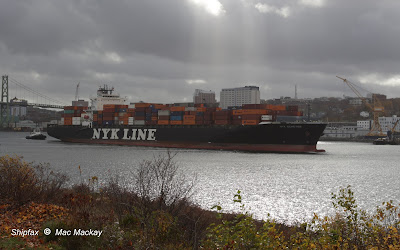 NYK Demeter, sailing for the G6 Alliance made its way to the pier with the tug Atlantic Oak as stern escort, and was joined for berthing by Atlantic Willow, which saved on fuel by remaining at Fairview Cove all morning after docking Atlantic Sail. 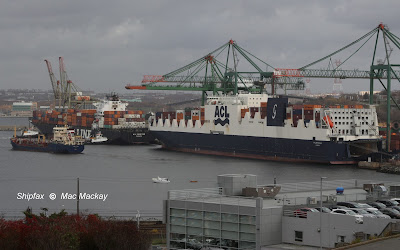 Once it was longside, but not yet made fast, the bunkering tanker Algoma Dartmouth had finished operations with Atlantic Sail and got underway to return to its home at pier 34.

Through all this activity a lone pleasure sailor decided to take a close up view, while towing an open boat.


At the other end of the port, Halterm had a short visit from the Icelandic Reykjafoss but was otherwise quiet today. That was not the case yesterday when it worked four ships. 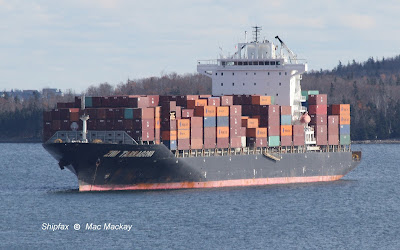 Zim Tarragona spent most of yesterday at number one anchorage waiting for fleet mate Zim San Franciso to clear the berth at pier 42. Pier 41 was occupied by Oceanex Sanderling which would normally have been there on a Friday. Nolhanava occupied its usual berth at pier 36, loading for St-Pierre et Miquelon on a Thursday instead of  a Friday.

All this Thursday activity was as a result of Remembrance Day observances today. Most Nova Scotians who work on Remembrance Day are entitled to another day off with pay, so most businesses shut their doors on November 11.

Halterm also announced that it has landed a new line, Tropical Shipping, relocating from Saint John after many years. Tropical, which serves the Caribbean was not able to come to terms with new terminal operators in Saint John and had little choice but to find an alternative port.
Their two ship rotation will make Halterm busier, and will only add to downtown Halifax traffic woes.

I hope to see all the small ship lines transfer to Fairview Cove when the two Halifax piers merge under common management. Even then we will see days when there is not enough pier space.  An extension to Fairview Cove, with an additional RoRo berth seems inevitable as a short to medium term answer to the needs of the port.