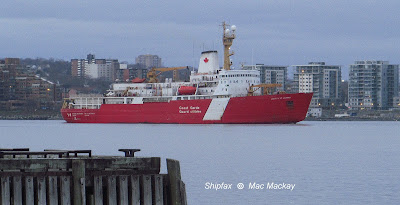 This year it went to work in the arctic leaving Halifax July 22 and sailing via Tromso, Norway. It was once again a visitor to the North Pole and returned to Halifax a week ago.

Still impressive after all these years, the ship will be among those that will need another upgrade or be replaced temporarily until is successor* finally arrives on the scene - maybe in 2012 or 2022. The Canadian Coast Guard has put out feelers for interim icebreaking capability as ships go into major refits or are retired in the next few years.

While the world does not abound in icebreakers, a number of nations and private companies do have them, some of which would be available due to the downturn in arctic oil exploration.

* It seems possible that the Louis's replacement will be delivered under a Liberal government. If so there will be a lot of pressure to change its name from the current designation John G. Diefenbaker to the Pierre Eliot Trudeau. I have always favoured the name Mike Pearson for the ship, since the former Liberal Prime Minister Lester B. Pearson was known as that during his days as a flyer in the Royal Flying Corps in World War I and as a diplomatic courier in World War II.  He was also a multi-sport athlete, and Mike seems a more befitting name for a man of his talents and achievememts.