When the port has three berthing tugs standing by but has an arrival and two departures scheduled for virtually the same time, someone will have to wait. That happens from time to time and it did today. It was not helped by the fact that the container ship CMA CGM La Scala needed all three tugs to squeeze into its berth at pier 41. The EM Kea was at pier 42 and there was room for the big ship, but it took some time to get it secure.

Atlantic Willow is on the port bow, with the other tugs on the starboard side, ready to turn the ship to back in to pier 41.

CMA CGM La Scala is a a 99,931 grt ship of 109,000 dwt with a capacity of 8465 TEU and seemed pretty much up capacity, though how many were revenue is questionable. The ship was built in 2010 by Samsung Shipbuilding and Heavy Industries Co Ltd, Koje.


As soon as Atlantic Willow was freed up it hustled over to Autoport to clear Rhea Leader. That ship had arrived early in the morning and was due to sail at 1115, but did not get clearance until after 1230 hrs.

Rhea Leader flies the Japanese flag for NYK Line and dates from 2008 when it came from the Toyohashi Shipbuilding Co. It has a gross tonnage of 63,004 but only 21,428 dwt and is bound for Newark, NJ. 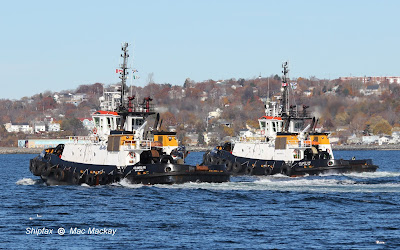 The fraternal twins Atlantic Fir and Atlantic Oak make their way to the Dockyard.

The CMA CGM La Scala was finally secure enough to let the Atlantic Fir and Atlantic Oak go by 1250 and they made their way to HMC Dockyard to sail USS Detroit for 1300 - one hour later than scheduled. There is usually a US Navy presence in Halifax on Remembrance Day and this year it was the brand new littoral combat ship designated LCS 7. 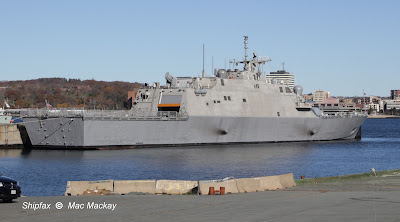 Built by Marinette Marine in Wisconsin, it is the fourth of 13 Freedom class LCS and is on its delivery trip from the builders to its eventual base in San Diego, CA..

Laid down in October 2012, launched October 2014, it was commissioned in its namesake port on October 22, 2016. An interesting aspect of the commissioning was the presence of a 3 person RCMP colour guard - the first time another nation was present at a USN commissioning. Not only did the colour guard present the flag, but O Canada was played.
The three RCMP officers were there to recognize the Canada -US Shiprider  program in which law enforcement officers of both nations jointly crew vessels on border patrols. The officers are authorized to enforce the laws of each other's nation. One of the Shiprider bases is in Windsor, ON.