It was a day for outbound ships as all arrivals were in early morning or early evening darkness.

Colorado Highway made a brief visit to Autoport, arriving early morning and sailing before noon.

The K-Line ship was built in 2005 by Naikai, Setoda, Japan with a grt of 44,382 and a very light dwt of 8,546. It was probably not originally intended for round the world service in view of its size, but that is what it is doing now. It is interesting to see how much auto carrier design has evolved in 10 years or so.

USCG Bristol Bay WTGB-102 is on its way from Baltimore via New York and Boston, to the Great Lakes to take up station. Fresh from a Service Life Extension Project [SLEP] refit at the CG base in Baltimore, the light icebreaker looked very spruce as it sailed mid-afternoon. It left its Detroit, MI home port in August 2015 for the extensive upgrade. 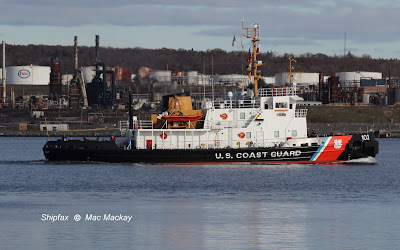 Six of this "Bay" class of nine icebreaking tugs are based on the Great Lakes. The other three are based in Maine and the Hudson River. Bristol Bay is one of two such boats equipped to handle an Aids to Navigation [ATON] barge to service buoys. The barge carries a crane and workshop for buoy maintenance  and replacement. Many Great Lakes buoys are lifted for the winter due to ice and the barge is well suited for that work in sheltered waters.


The durable Atlantic Huron put in a call at National Gypsum, arriving late last night. It sailed early this afternoon with a full load bound for the St.Lawerence Seaway. 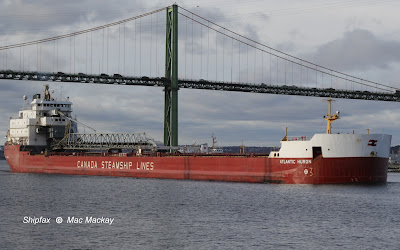 It is the last of three CSL ships with similar names, Atlantic Superior scrapped in 2015 in China and Atlantic Erie en route to scrap in Turkey [see yesterday's post] A fourth ship of similar class, Nanticoke is still sailing as Salarium on charter to Mines Seleine in the Magdalen Islands to carry salt.

Atlantic Huron is a long time caller in Halifax since it was built as Prairie Harvest in 1984. It was converted to a self-unloader 1989 and renamed. After a stint under Bahamas flag  from 1990 -1992 and again as Melvin H. Baker II from 1994-1997 on charter to National Gypsum, it returned to Canadian flag as one of the ships used to deliver magnetite slurry to the Hibernia gravity base, with fleet mates Atlantic Erie and Nanticoke in 1997.
Over the winter of 2000-2001 Halifax Shipyard replaced its bottom steel and in 2002-2003 it was widened to the new maximum St.Lawrence Seaway width at Port Weller Drydock. Rumours of its demise have been rife for several years, but it soldiers on.

Also sailing this afternoon was the somewhat scruffy looking OOCL Kuala Lumpur. Ships of OOCL usually have smarter looking paint, but this ship has been hard driven with no time out. Built in 2007 by Koyo Dockyard Co in Mihara, Japan, the 66,462 grt, 66,940 dwt ship has a capacity of 5888 TEU (including 586 reefers) and was a post-Panamax ship until the opening of the new Panama Canal this year. Since 2010 it has been flying the Singapore flag for Kowloon owners Grace Ocean Investment Ltd, carrying on a charter to OOCL by original owners Nissen Kaiun. 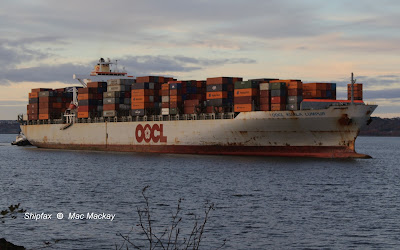 The ship sails for the G6 Alliance which will be overhauled over the next year, along with several other container ship groupings.

With the return of Standard Time, we revert to the Dark Ages of Ship Watching. I will attempt to make up with items from various past eras.