The Newfoundland ferry Sir Robert Bond has been sold "as is" after a two year layup. The new owner, known as Beausejour Peat Moss Inc plans to use the ship to transport New Brunswick peat moss to the United States. The company was the highest of three bidders and paid $707,250 according to press reports.

Built in 1975 by Port Weller Dry Dock in St.Catharines, ON, the ship was originally a rail car ferry for CN Marine. It ran between North Sydney, NS and Port aux Basques, NL carrying up to 33 standard guage rail cars. Once landed in Newfoundland, the cars were fitted with narrow gauge trucks to run on the island rail system.

The ship was converted by Davie Shipbuilding in Lauzon, QC in 1978 to a 100 car, 200 passenger ferry (later increased to 235 PAX) and was assigned to the seasonal Labrador service out of St.John's, replacing the William Carson that sank in ice the previous year.

It did return to the Cabot Strait run in winter as other ships were in refit and it filled in for Princess of Acadia on the Digby, NS -Saint John, NB run in January 1979 and perhaps in other years too when the regular ship was drydocked.

A handsome ship, designed by Robert Allen Ltd, Sir Robert Bond slides out of North Sydney for Marine Atlantic in May 1982. It had replaced the chartered Stena Nautica.

CN Marine became Marine Atlantic in 1987, and in 1997 the Province of Newfoundland took over all of Marine Atlantic's coastal services. In 1998 Sir Robert Bond was placed under Coastal Marine Services (Woodward) Management and ran from Lewisporte to Cartwright and Happy Valley-Goose Bay.  Once the Trans Labrador Highway was opened in 2010 the ship was made obsolete as its freight capacity was no longer needed. CAI Nunatsiavut Marine Inc took over management in 2011 but the ship's only operation was as winter ferry from Corner Brook, NL to Blanc Sablon, QC. (It was too big to use St.Barbe, NL the regular port on the island side of the Strait of Belle Isle.)

On arrival in Lewisporte in April 2014 the ship was laid up and has been idle over since.

In late 2004 an attempt to carry peat moss out of Shediac, NB saw the ship detained at Cape Tormentine for 618 days before being towed away for scrap. 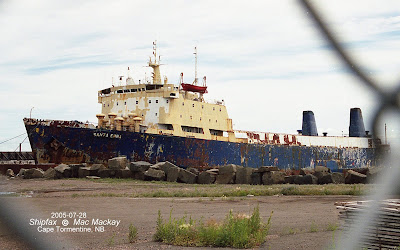 The RoRo Santa Emma was built in 1969 by Robb Caledon in Dundee Scotland as the Maheno for The Union Steamship Co of New Zealand. It went through a handful of owners and was renamed eight times before arriving in Canada under the Panama flag. While detained at Cape Tormentine it parted lines and blew aground in April 2015. The Coast Guard stepped in and refloated it and emptied 30,000 to 40,000 liters of fuel. The owner was not forthcoming with payment, so the ship was sold in Federal Court for a mere $66,000. Renamed Santa it was towed away for scrap by the tug Rig Deliverer on September 18, 2005 in a tandem tow with the laker Willlowglen. It sank en route October 10 in position 36.53.3 N x 28.14.4W.
I believe this was the last tandem scrap tow from Canada.

Peat moss, despite being tightly compressed in bales, is expensive to transport by truck relative to its value. The new owner wants to load many trailers on the ship and deliver them to the US directly thus avoiding over the road costs and restrictive weight limitations.

I have no record of seeing the Sir Robert Bond in Halifax, but perhaps that opportunity will come. It is reported that the new owners will be putting the ship back in service quickly.