One way traffic in the Narrows

As the name implies, the Narows is not wide enough for two large ships to pass. 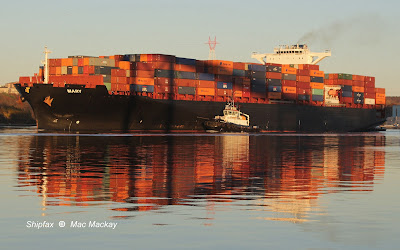 The shadow of the A.Murray MacKay bridge falls across the Mary as it makes its way toward Bedford Basin. Tug Atlantic Willow has made fast forward and Atlantic Fir is tethered aft.


With the container ship Mary arriving for HAPAG-Lloyd this afternoon, the ConRo Atlantic Sea stood by in Bedford Basin waiting. It was only a matter of a few minutes, and Atlantic Sea was underway again. You could almost feel the Atlantic Sea panting to get underway.

Late afternoon sun lights up the Mary as it makes it turn around Seaview Point, and Atlantic Sea has already powered up to go.

Mary has been here before for H-L, beginning in September on their AZX service.It was built by Hyundai Samho in 2013 and is a post (old) Panamax ship of 71,021 grt, 80,274 dwt with a capacity of 6900 TEU including 800 reefers.  It is operated by Technomar of Athens and  flies the Marshall Islands flag. 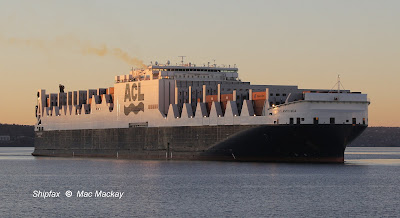 Atlantic Sea heads for the Narrows as the sun sets. Escort tug Atlantic Oak is in position astern, but not visible.

Atlantic Sea, the third of ACL's new G4 class ships, made its first call here August 21 but was not officially christened until October 20 when Princess Anne was the sponsor in Liverpool, England.