All new to us

Four ships, all new to Halifax, put in appearances today.

BBC Nevada arrived in the early hours of the morning at pier 31, and by the time I caught up with it, it had apparently completed its cargo work - possibly loading a heavy lift.
Built in 2006 by Qingsham, Wuhan as Jasper it was quickly renamed Belgua Federation, but equally quickly became Jasper again in the same year. Due to financial irregularities, Beluga shipping failed and its fleet was redistributed. In 2011 the ship was renamed Frida Scan and in 2013 Thorco Diva. Then in 2015 it became BBC Nevadas as it moved into another charter, altough still managed by Thorco Shipping. 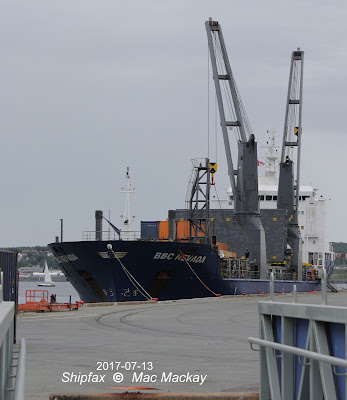 Late this afternoon the ship's cranes are re-loading the tween decks hatch covers. 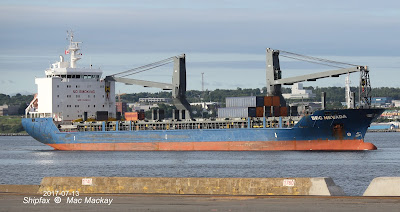 Sailing this evening, the ship even has a few containers on deck.

It is a typical Beluga F class multi-purpose heavy lift ship with a pair of 120 tonne cranes (combinable for 240 tonne lifts) and removable tween decks and box shaped holds. Tonnages are 9611 grt, 12,737 dwt.


The product tanker Cape Bradley arrived at Imperial Oil after a week at anchor outside. 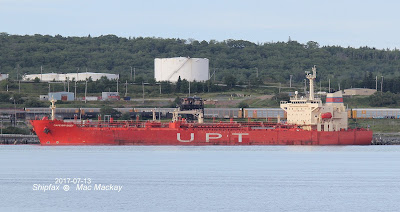 Built in 2004 as J.Shartava by Hyundai Mipo, UIlsan, the ship was renamed in 2005 and is owned by Cape Parry Shipping Co Ltd, and managed by Columbia Ship Management. It operates in the United Product Tanker (UPT) pool. At 25,108 grt, 40,305 dwt it is a mid-size vessel of the Mid-Range (MR) type. 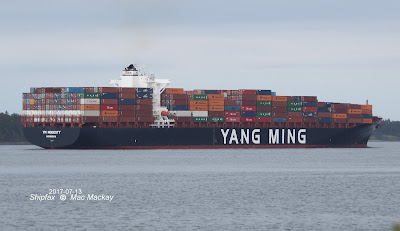 THE Alliance brought in YM Modesty on its EC5 service. The ship is a 6258 TEU vessel of 71,821 grt, 72,730 dwt. Although sailing for Yang Ming it is owned by Ben More Shipping Inc, an affiliate of Zodiac Marine of London, on long term charter.

ZIM continues to up the ante with ever larger ships. Today's arrival  ZIM Ningbo is 91,158 grt, 108,427 dwt with a capacity of 8440 TEU (including 700 reefers).  It was built by Hyundai Samho, and is chartered to ZIM by Flamingo Navigation (NSC Shipping). 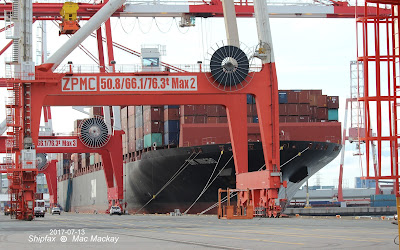 It needed the large cranes at Halterm, so berthed at pier 41, causing Oceanex Sanderling to anchor for the night.
Posted by Mac at 9:27 PM