Friday and Saturday Round Up

A fist time caller Friday was Glen Canyon Bridge another of the many K-Line ships we are seeing now with the new service THE Alliance that has replaced the G6 Alliance. Although HAPAG-Lloyd is a primary partner in the service, their ships are not included in the various strings that call here. 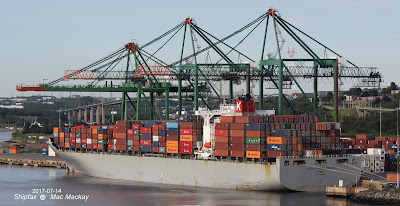 Today's arrival at Fairview Cove is Berlin Bridge another K-Line ship on THE Alliance service, this one on the AL6, Transatlantic run. 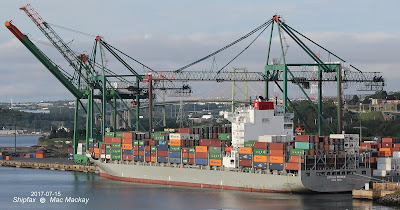 Only one crane in operation to work the smaller, more lightly loaded ship.

Two tugs alongside are in position to turn the ship to tie up at Halterm, starboard side to.

Although a few hundred boxes short of the 10,000 TEU figure, it is still a large ship. It is owned by the Claus Peter Ofen group of Germany and was renamed Pelleas between 2010 and 2014 only, as it served some other service than CMA CGM.

After the July 1 - July 4 United States Navy presence of an aircraft carrier and three accompanying vessels, this week there was a lone USN ship. Arriving Thursday USS  Jason Dunham sailed this afternoon.

An Arleigh Burke class ship it is designated DDG-109 and is homeported in Norfolk, VA.

Halifax is a way point and a destination for all sorts of pleasure craft, from small sailing vessels to large super yachts. The latter usually attract considerable attention (and speculation about the owner). Today's arrival Sycara V registered in Georgetown, Cayman Islands, is certainly a super yacht. Built in 2010 by Nobiskrug in Germany, the 1566 grt vessel can accommodate 14 (not including crew) and is equipped with all imaginable amenities. 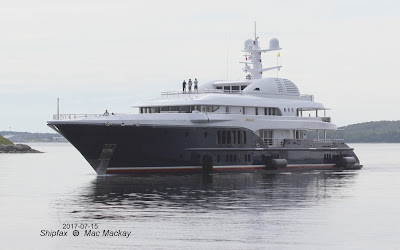 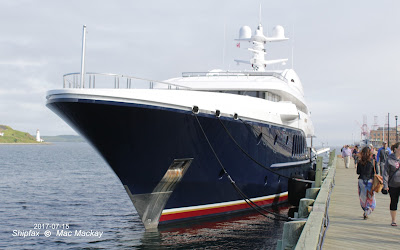 Tied up at Salter's wharf, boardwalkers were able to get a close up look.

Roll Out continued...
Following today's restricted open house in which hundreds visited Halifax Shipyard ( and tying up traffic for a mile) workers rolled out mega-block #3 of the future HMCS Harry De Wolf. By late afternoon they had it aligned with mega-block #2. 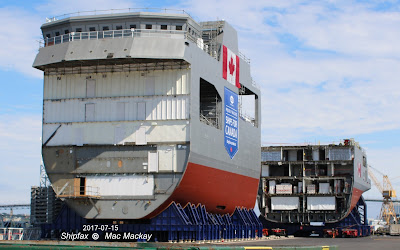 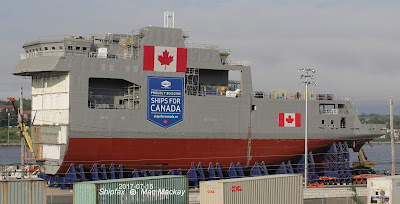