Another "new to Nirint" ship arrived last night with a load of nickel and sailed late this afternoon. The ship is Atlantic Patriot, an sister ship to Atlantic Pioneer and Atlantic Progress that have called here before under several different names. 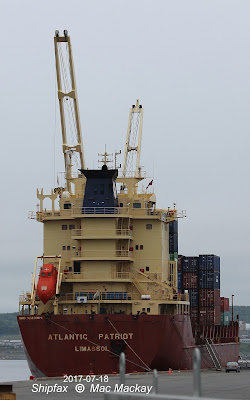 This is the first time for Atlantic Patriot under its present name or any of its four previous names.
It was built in 2003 by New Century Shipbuilding Co in Jinjiang, China and is a multi-purpose type with removable tween decks and a pair of 45 tonne cranes. It has a container capacity of 1118 TEU and measures 12,993 grt, 17,471 dwt.

It was originally named Atlantic Progress and has been renamed to suit various charterers ever since. In 2003 it became  BBC Russia, in 2008 Federal Patriot, in 2010  HAL Patriot and took its present name in 2013. It has remained under the ownership of Intership Navigation and is registered in Limassol, Cyprus.
There was dense fog when the ship sailed, so no underway photo was possible, but there are photos of its sister ship in previous posts: