Latest merger - WHERE WILL IT END

The latest mega deal in the container shipping business is another stunner.

The Chinese state shipping company COSCO Shipping Holdings Co Ltd  has bid $6.3 bn to acquire OOIL (Orient Overseas International Ltd) owners of OOCL (Orient Overseas Container Line). 70% controlled by the Tung family, OOCL was a leader in many areas of the industry but a relatively small player compared to the giants. However its acquisition by COSCO vaults COSCO into third largest line after Maersk and MSC and ahead of CMA CGM. 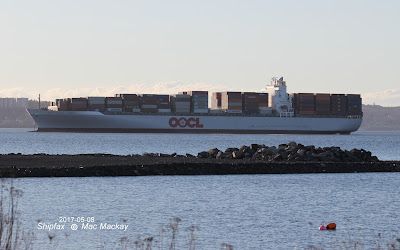 The last (ever?) OOCL ship to call in Halifax, OOCL Kuala Lumpur was winding up the old G6 Alliance service. OOCL was not included in a new group called THE Alliance.

But it is not over yet! A 24% owner of CMA CGM, the Yildrim family, is tendering its shares (through a Chinese bank) and it is expected that COSCO will snap them up. Should that be the case they will become the world's second largest container line.  There is speculation by the experts that indeed COSCO's goal is to take over top spot from Maersk.

Paying a bewildering 31.1% over market value of OOCL shows that COSCO is not playing on the same playing field as private industry. Surely someone has to put a halt to this.

OOCL to be part of COSCO

CMA CGM, (including APL) soon to be part of COSCO

Lets hope the various national regulators have the guts that tiny South Africa did recently when it condemned the much less contentious Japanese K-Line, MOL, NYK alliance. That Alliance will not be able to call in South Africa as a result, even though other nations' regulators approved or turned a blind eye to it.

Regulators should find a way to put a halt to either the OOCL buy or the CMA CGM buy. As it is now there is barely enough competition (even though with historically low rates, lines are still competing, but hurting in the process).