Four down - one to go

As I was taking a photo of ACL's G4 ship Atlantic Sail leaving Halifax yesterday, another event was unfolding on the other side of the Atlantic. The G3 ACL ship Atlantic Cartier was sailing from Hamburg bound for Alang, India. It has a date with the scrappers on August 18.

That leaves only one G3 ACL ship still in service, Atlantic Conveyor, which left Liverpool on the same day July 16,  and is due in Halifax July 24 on the westbound leg of what is likely to be its last trip.

The five third generation ships, regular callers in Halifax for thirty years, have almost become part of the landscape. (That is why one of them has been featured on the masthead of this blog). 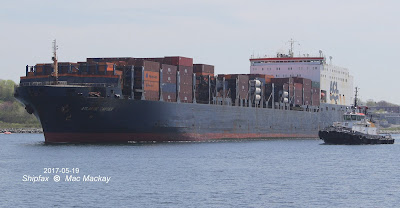 Atlantic Cartier - named from the French explorer out of Saint Malo, who first visited what is now Canada, in 1535- was aptly named by its original owners Cie Generale Transatlantique when it was built in 1985 by Chantier du Nord et de la Mediterranée in Dunkerque. It has soldiered on through lengthening and various incidents including a serious fire, and the evolution of the original ACL owners to today's Grimaldi Group. It was due to be replaced a year ago, so has certainly been on borrowed time.

Among the ship's more memorable calls in Halifax was in April 1987 when it steamed out through drift ice, without the assistance of CCGS Louis S. St-Laurent, which has standing by just in case. 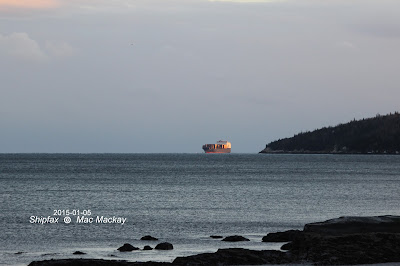