Today was Roll Out Day at Halifax Shipyard. Crews moved mega-block #2 of the Arctic Offshore Patrol Ship Harry De Wolf from the Assembly Hall to the hardstand at pier 7, where it will be joined to the other two mega-blocks. 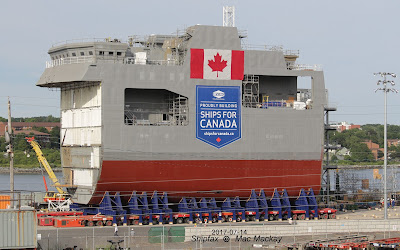 Mega-block #2 on dollies, during final positioning.

Mega-block #2 is the midships portion of the ship and includes the engines and the bridge structure.
Mega-block #1, which is the aft section is likely to be rolled out tomorrow. Mega Block #3, the bow section, is still being assembled and will follow. 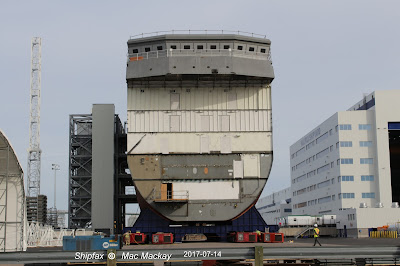 The structure to the left of the ships (which includes an elevator) allows workers access to the various levels of the ship. The white tower on the far left is the base for a crane.
Workers are in the process of lowering the dollies. 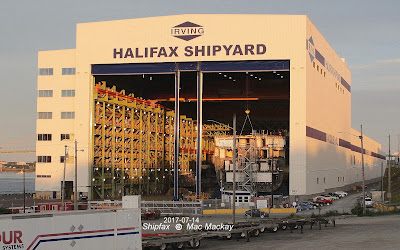 A rare glimpse inside the main assembly hall with mega-block # 3 on the right.

Each mega-block consists of a number of large blocks (nine in mega-block #2). These 21 blocks were assembled from 63 smaller blocks which were built up progressively and moved along in assembly line fashion until roll out.

With the high level of work completed in the blocks the ship is said to be 60% complete.  Once the three Mega-blocks are joined and the internal structural connections are made, the ship will be ready to launch in 2018. Launch will be by means of a floating drydock, which is currently under construction off-site.

Final fitting out will be done once the ship is afloat at pier 6, alongside the shipyard.

There will be a restricted open house at the shipyard tomorrow, Saturday, July 15. An invitation process on line was necessary to get a pass for the event. Guest will not be allowed to carry cameras or have any form of back back, fanny pack, computer, and must wear safe footwear, among other requirements. 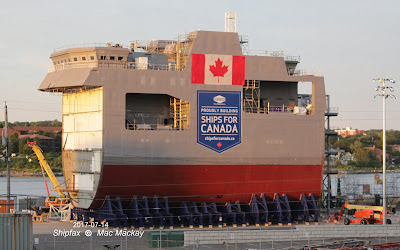 By mid-evening the multi-wheeled dollies have been removed and the blue cradles are bearing on the ground.