With the annual Shipfax vacation about to start soon, it seems like a good time to do a small round up of pending events.

The Atlantic Pilotage Authority has acquired a pair of high speed pilot boats to supplement their  fleet. The boats were built in the Netherlands and had seen service for Sima Charters in the UK before they were acquired this spring. Their trip to Halifax was an interesting one. From the port of Waalhaven, they were lifted aboard the Icelandic cargo ship Bakkafoss on June 17. On arrival in Reykjavik they were unloaded and then transferred to the Reykjafoss for the trip to Halifax. On arrival here July 1 they were unloaded and moved to Dominion Diving's facility at Dartmouth Cove for final fit out.

The two boats have now been renamed Nova Pilot (the former SC Lynx) and Scotia Pilot (ex SC Cheetah) both were built in Huesden, Netherlands by ShipInstall BV. Although they are  built to the same basic design they are slightly different. 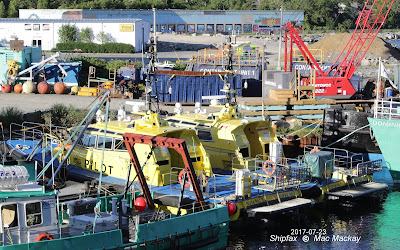 Nestled in at Dartmouth Cove, the pair have recovery platforms on the stern and lifting cradles to recover persons from the water.

Scotia Pilot was built in 2011 (according the previous owners, but 2012 according to Transport Canada) and is powered by a pair of Caterpillar engines totaling 1304 kW (1748 hp) and driving a pair of Rolls Royce waterjets for a maximum speed of 26 knots.

The boats are both 18.5m long by 5.6m breadth with a draft of 21.1m and can carry 12 persons with a range of about 300 miles.
They are also fitted with second steering station outside and extensive man overboard recovery gear. Other fittings include heated deck and hand rails. 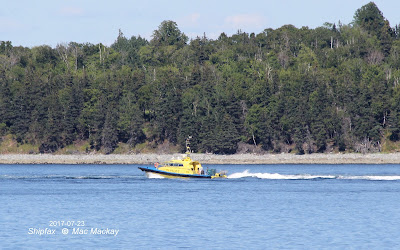 Scotia Pilot returning from a practice run with the outbound Ningdo Express in the Middle Ground area, but the regular pilot boat Chebucto Pilot did the actual disembarking at the pilot station.

The ferry Dartmouth III has completed drydocking in Sambro, but is still undergoing some work alongside the government wharf. The new owners plan to sail the vessel to Toronto via the Gulf of St.Lawrence with many stops along the way. 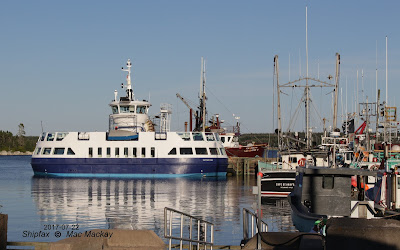 Amongst the fishing vessels at the Sambro government wharf, Dartmouth III looks very much out of place.  Sharp eyes will detect that its name is applied to a plate which presumably covers a new name that will not be revealed until it reaches its now home in Toronto.

Speaking of long trips through the St.Lawrence system, the little bunkering tanker Arca I that got into trouble last winter and ran ashore in Cape Breton, has finally departed from Sydney on its way to its new home in Mexico. This time it is on board the heavy lift ship HHL Tokyo departing Sydney July 19 and now travelling in comfort and safety.

An interesting yacht visited Halifax last week, and sailed this morning, so if you didn't see it, here are some photos.

Silver Cloud is the world's first SWATH type yacht. The Small Waterplane Area Twin Hull design uses small diameter twin hulls to reduce water plane area and increase efficiency through the water. The two cylindrical hulls (11 feet in diameter in the case of the Silver Cloud) are bridged by the ship's deck making a roomy and stable catamaran. 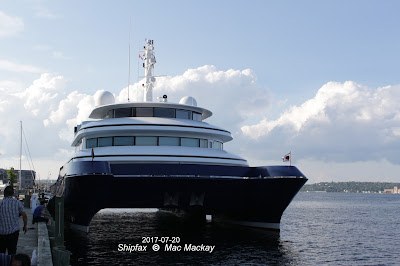 This one was built in 2008 by Abeking and Rasmussen in Lemwerder, Germany and measures 134 feet long x 58 feet wide, and has generous accommodation for five guests and five crew. It features all the usual amenities and bells and whistles and can accommodate a small helicopter (of course). 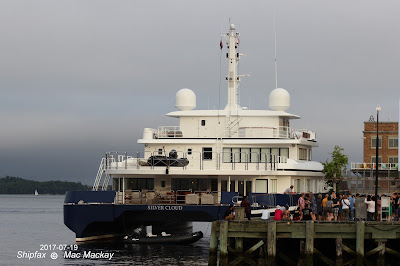 With a Latin dance party going on at full blast on the adjacent dock, I hope the yachters had good sound proofing.
For this yacht, there are numerous on line links with many interior photos, and even identification of the owner:
http://yachtsilvercloud.com/index.htm

This is not the first SWATH type craft to call in Halifax,. In fact one of the earliest SWATHs is CCGS Federick G. Creed, built by Swath Ocean Systems Inc of San Diego, CA in 1988 and lease / purchased by the Minister of Fisheries and Oceans in 1989. Although it sailed out of Halifax for a time it has been based at the Maurice Lamontagne Institute in Mont Joli, QC and rarely leaves the confines of Gulf of St.Lawrence conducting marine research. 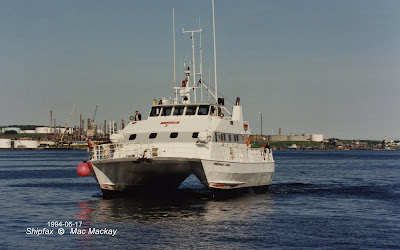 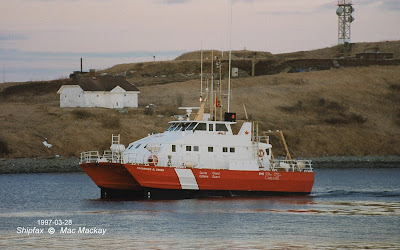 In Fisheries and Oceans colours, and as a Coast Guard ship, the vessels passes George's Island inbound to Halifax.