Cargo with wheels keeps rolling in and out of Halifax. Arriving for Autoport Dalian Highway is one of a few PCTCs (Pure Car and Truck Carriers) built in China. It came from the Nantong COSCO KHI in 2011 and measures 58,535 grt, 21,616 dwt and sails for K-Line's huge fleet of car carriers. 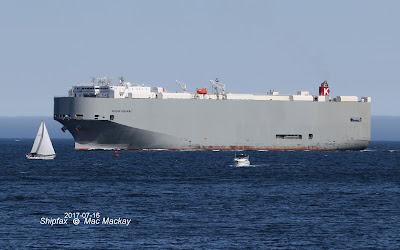 A thick bank of fog lies offshore as Dalian Highway works its way into port.


Arriving early this morning and sailing mid-afternoon, Atlantic Sail is a combination of Roll On-Roll Off and container ship entered service in 2016 and is the second of five ships of its type The the fifth, Atlantic Sun is reported to be in Dunkerque, France in drydock before entering service. 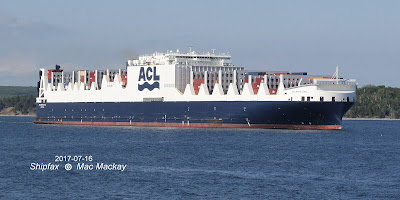