The auto carrier Siem Cicero made its first arrival in Halifax today on its first revenue trip (aka its maiden voyage). 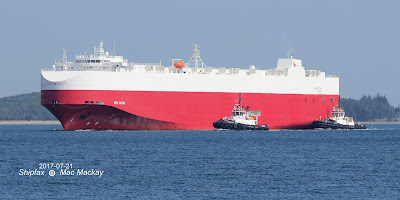 The ship was launched as recently as November 12, 2016 by Uljanik shipyard in Pula, Croatia, one of three new auto carriers under construction for Auto Marine Transport Inc of the Cayman Islands. It is on charter to and managed by Siem Car Carriers Inc of Norway. (The Siem group of companies includes Secunda Marine of Halifax and St.John's and is active in offshore work among other shipping interests).

The ship was delivered about June 30 and voyaged to Emden, Germany where it took on its first load. While sailing on July 13 it lost its ability to steer, through some sort of software glitch and ran aground in the River Ems. It was pulled off without damage and was able to resume its trip the next day.

There are several videos of its impressive stern first launch, including on Siem Carrier's web site: http://www.siemcarcarriers.com/siem-cicero-launch-12th-november-2016/