Two ships named for people arrived in Halifax today. Most ocean going ships are not named for people (with the exception of some well known passenger ships) so it is is always interesting to find out who the people were.


First arriving was Akadenik Ioffe one of two Russian oceanographic/passenger ships operated by One Ocean Expeditions for arctic expedition cruises in Canada this summer. Akademik Ioffe was built in 1985 by Hollming in Rauma, Finland and is owned an operated by the Shirshov Institute. It carries 96 passengers, 65 crew and 10 Zodiacs, and is fitted with stabilizers. Its four northern cruises this summer out of Iqaluit and Resolute will cover much of the eastern arctic and end in Greenland. For this the ship received a coasting license as did sister Akademik Sergey Vavilov which will conduct similar cruises. 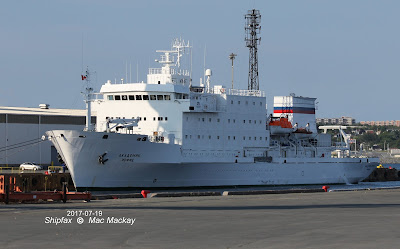 Akademik Ioffe at pier 27 - not a usual pier for cruise ships- taking on stores. The shadow from the grain gallery at pier 28 falls across its bridge.

Akademik Ioffe is named for a leading Physicist of the Soviet era, Abram Fedorovich Ioffe (1880-1960) , a student of Roentgen (credited with development of  the X-ray)  and an early developer of the basis of radar. His many other achievement lead to Lenin and Stalin medals, but his Jewish ancestry (he converted to Lutheranism as an adult ) lead to a demotion. Nevertheless he is well remembered as a pioneer in many areas of physics.

The is not listed in the Port of Halifax cruise ships statistics because it is one a positioning voyage, and is here for stores. Its first of four cruises in the Canadian arctic depart from Iqaluit July 25.

The second caller named for a person is a more familiar visitor to Halifax. Radcliffe R. Latimer  is here to load gypsum, but must wait at anchor until the CSL Tacoma finishes loading tonight.
The ship was built in 1978 by Collingwood Shipayrd as Algobay a "Nova Scotia class" self-unloading bulk carrier. Built to maximum allowable St. Lawrence Seaway size, it was also designed to make Atlantic coastal voyages.  In 1990 it was reflagged Liberian and chartered to Atlantic Beltships, then  after a 1994-1997 charter to CSL as Atlantic Trader under Liberian flag, it returned to Canada and resumed services as Algobay until 2002 when it was laid up in Toronto. 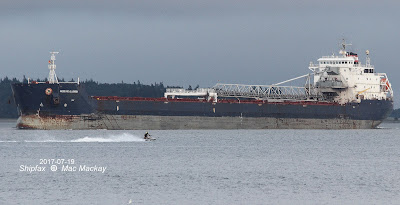 In early 2008 it underwent extensive strengthening and was towed to China where an entire new forebody (to revised and larger Seaway dimensions), engines and generators were installed. It returned to Canada in time for the 2010 season.

In 2012 the ship was renamed Radcliffe R. Latimer in honour of the Chairman of the Board of Directors of Algoma Central Corp. Mr. Latimer retired in 2010 after a distinguished business career with, among others CN Rail, Trans Canada Pipeline, and Prudential Assurance. He lead the growth of Algoma Central Marine to the largest Canadian Great Lakes shipping company, it diversification into tankers and its fleet renewal program has seen many new ships added to the fleet. Born in 1933 in Florance, ON he now resides in Toronto.
Posted by Mac at 10:15 PM