This may be my final posting on the Atlantic Conveyor except perhaps for a report that she has headed for the scrap yard. Her arrival today is likely her last westbound trip, and since I will be away when she makes the return eastbound call next week, today was also my last chance to see the ship.
As the last Atlantic Container Liners (ACL) G3 in operation it is worth repeating some of the history that I have recounted before. 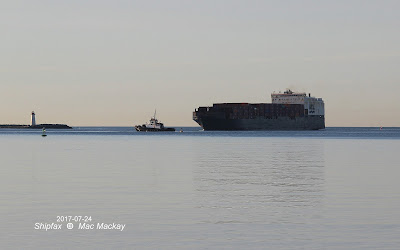 Atlantic Conveyor passes Meagher's Beach this moring, to be joined by its escort tug Spitfire III.

The ship was launched July 12, 1984 at Swan Hunter on the Waalsend-Neptune yard on the Tyne and made her maiden call  in Halifax February 1, 1985. Named Atlantic Conveyor by her owners, Cunard Steam Ship Co Ltd, she was was the second ship to carry that name.  The first Atlantic Conveyor was also a product of Swan Hunter Shipbuilders Ltd from their Walker yard in Newcastle in 1970. It was one of the second generation (G2) series built for service with ACL and was a regular Halifax caller. 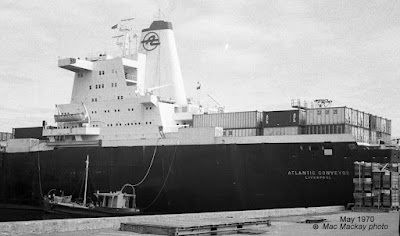 The first Atlantic Conveyor taking water at the pier 36 RoRo ramp. This was its regular berth until the Halterm container terminal was completed. 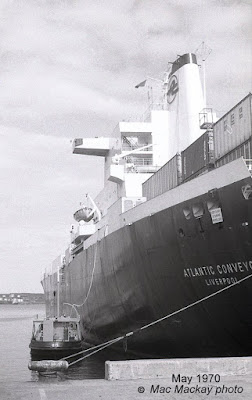 A steam turbine ship, it needed to replenish its fresh water supply from time to time..


It served ACL until 1982 when it was requistioned by the UK Minister of Defence for service in the Falklands War. Fitted out to carry military supplies, it was not armed. On May 26, 1982 it was struck by two exocet missiles from Argentinian aircraft. Unspent propellant ignited a fire that gutted the ship, killing twelve including the ship's long time master, Capt. Ian North, well known in Halifax. The seven helicopters that were on board were also destroyed and many other supplies. Prince Andrew witnessed the strike and was first on scene in his helicopter to lift off survivors. It sank a few days later in tow. 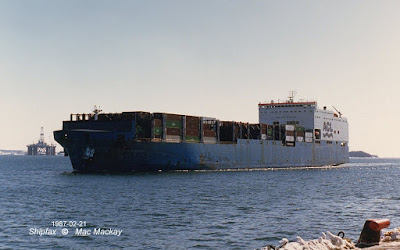 A few months before lenghtening, Atlantic Conveyor arrives in Halifax.

The second Atlantic Conveyor arrived at Scott Lithgow Ltd in Greenock, Scotland July 14, 1987 and was lengthened 42m (to 291.92m) , increasing its capacity substantially. RoRo capacity was increased by 3570m2, containers by 336 TEU (to 2908) , cars by 500 units, and its engine increased by 3,670 bhp (to 27,398 bhp) . That engine, a massive 6 cylinder B+W was built under license by John G. Kincaid, also in Greenock. The ship was already distinguished by the turtleback cowl over its forepeak - unique amongst all the ACL G3s. All the other G3s were lengthened by Hyundai Mipo. 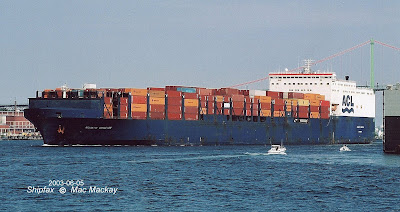 Through the various re-arrangements of ownership of ACL, Atlantic Conveyor has at various times flown the British and Bahamas flags, but since 2003 it has flown the Swedish flag, as ownership is vested in Atlantic Container Lines AB, which in turn is owned by the Grimaldi Group. 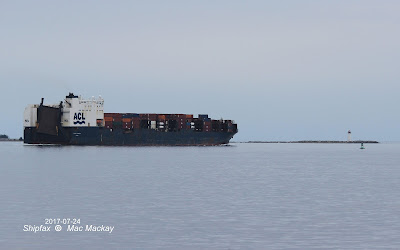 Outbound this evening after 32 years.