A visitor from the Great Lakes made a stop over for bunkers before sailing for Foynes, Ireland this afternoon. Fearless is a bulk carrier built in 2001 by the Naikai shipyard in Setoda, Japan. Its original name was Bright Laker and it made several trips to the Great Lakes under that name, before it was sold and became Fearless in 2013. Its dimensions of 606'-11" x 77'-5" make it a "Seawaymax" ship. It is fitted with four 30 tonne cranes to allow it to handle a variety of cargoes such as steel.

Its tonnages are 18,049 grt, 30,778 dwt, but due to draft restrictions in the St.Lawrence Seaway it cannot load to full deadweight tonnage on the Lakes.

It made its most recent trip to the Great Lakes when it entered the St.Lawrence Seaway June 2. It unloaded cargo in Oshawa, ON and Detroit, MI before arriving in Milwaukee June 17. There it loaded its grain cargo, sailing on June 23, and exiting the Seaway June 28. Unlike some Great Lakes callers it did not top up its cargo on the St.Lawrence, but continued direct to Halifax.

We will be saying goodbye to the the tall ship Esmerelda this evening. It moved out to anchor this morning to give the cruise ship Celebrity Summit lots of room to leave pier 21 (the cruise ship over- nighted in Halifax so that passengers could enjoy Canada Day celebrations). 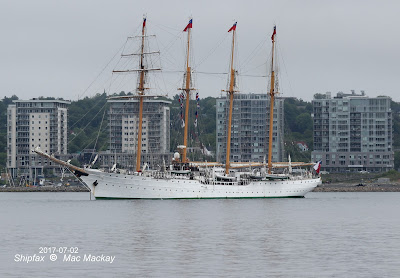 Back in its previous anchorage, Esmerelda battens down in preparation for heading to sea.

Also sailing this afternoon, was the newest member of the Canadian tanker fleet. Golden Oak, which arrived June 25, has been chartered by Algoma Tankers for six months, and placed under Canadian flag. That means it has a Canadian crew and can trade between Canadian ports at will. This is a refreshing change from the flurry of coastal licenses the various tanker companies resort to when there is an increased demand. The ship was registered in Halifax on June 15.

In this case Esso refinery shutdowns have meant an increased demand for tankers to deliver fuel to the Greater Toronto Area, and southern On tarioas  a whole.

I neglected to mention in my post of June 25, that the ship was built as Sichem Berlin in 2008 but was very soon renamed  Marida Margeurite. It took its present name in 2014. 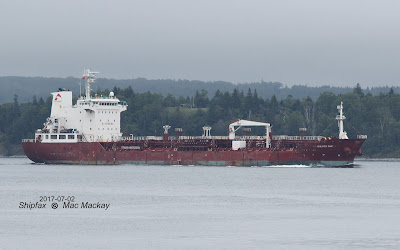 Golden Oak outbound for Nanticoke, ON.

Those coastal licenses allow foreign flagged ships (and their crews) to sail in Canadian waters, sometimes for prolonged periods. Most however are for a month, which makes it impractical to sign on a Canadian crew, much to the consternation of the seafarers.


See Tugfax for one such example.