Themis ramps it down

The large autocarrier Themis made its first call in Halifax today, on a very gloomy morning. It stopped first at pier 31 to unload some wheeled machinery and in the afternoon moved to Autoport to unload cars. 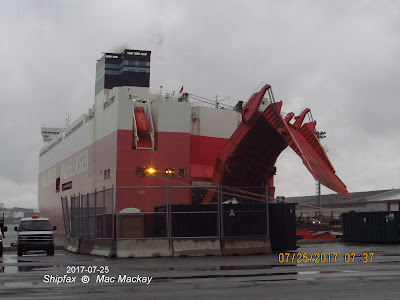 As soon as the ship was made fast it began to lower its giant stern ramp.

Built in 2016 by Hyundai Samho, the ship has a capacity of 8,000 cars, but can carry a variety of RoRo cargo too. Its 320 tonne capacity stern ramp allows for some very heavy loads. The ship is owned by Toda Shipping and managed by MMS Co Ltd. It sails for Wilhelmsen Lines under the Wallenius Wilhelmsen banner. Its gross tonnage is 75,283 with a deadweight tonnage of 23,786.