The HAPAG-Lloyd  cruise ship Europa arrived early this evening (earlier than I expected it - so no photo of this arrival) and will stay in port over night. The H-L cruise ships of this name (I have seen three so far) tend to do things a bit differently and have often stayed over night, and for a few years were the last of the cruise ships for the season.

The first Europa that I remember was the former Swedish-America Line's  Kungsholm - a transatlantic liner, that became a cruise ship for HAPG-Lloyd in 1966. It used to call in Halifax in its liner days, and was, in my mind at least, one of the most beautiful ships ever built. Even the H-L funnel marks did not detract from its graceful line and superb proportions. 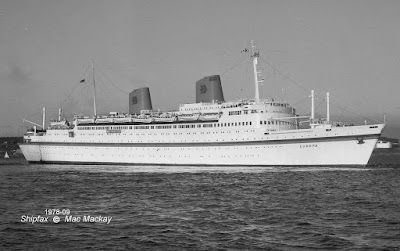 Built in 1953 by Royal Schelde in Flushing (De Schelde Koninklijke Maatschappij, Vlissingen) Netherlands It made its first crossing from Gothenburg to New York in November 1953. HAPAG acquired it in 1965 and it made its first voyage as Europa in January 1966 sailing to New York. In 1981 it was sold to Costa Line and renamed Costa C.   On July 29,1984 it struck a breakwater at Cadiz, sank and was declared a constructive total loss, and was broken up in Barcelona the next year.

The second Europa, also a fine looking ship in its own way came from the Bremer Vulkan yard in Vegesack in 1981. It was a Halifax caller in its prime until sold in 1999 to make way for the current Europa. 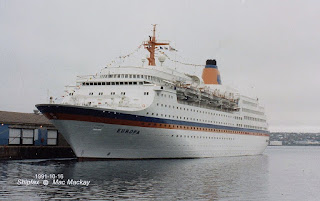 After it sale the ship has changed hands several times and has been extensively rebuilt twice. After five renamings, it is still sailing as  Saga Sapphire and called in Halifax in 2015. Again see Shipfax October 14, 2015 for more on this ships.

The present Europa dates from 1999 and has received many accolades from the cruise industry for the high level of service. I think its lines would have been improved without the inexplicable "blank spots" in its superstructure amidships.

Built by Kvaerner Masa in Helsinki it carries a maximum of only 408 passengers in 204 suites and has a crew of 275 to cater to the needs of its guests. It proved so popular that HAPG built another similar, but larger ship and named it Europa 2. It has yet to put in an appearance in Halifax.


On a more mundane level, another ship full of Germans also arrived today. The autocarrier Athens Highway is bringing another load of German cars to Autoport. It will spend the night offloading into a nearly empty staging area. Autoport has apparently caught up with its back log, so will be processing this shipment quickly. 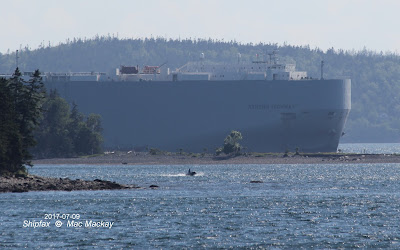 As the Athens Highway sails along past Ives Point a lone boater in a small inflatable strikes out from the cove. 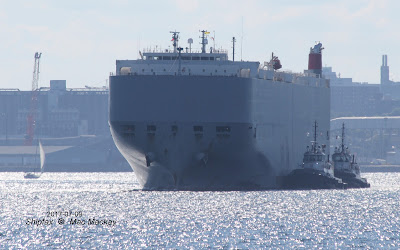 The ship has rounded Ives Knoll, with tug assistance, heading for Eastern Passage on a bright and hot summer day.