Fog early meant no photo of CMA CGM Otello on the Columbus JAX serice. The 8488 TEU ship is similar to several other CMA CGM fleet mates that have called here before, but it is the first time for this ship.

There was better luck later in the day and in the early evening as the fog had disappeared (at least for now). Budapest Bridge arrived for THE Alliance AL6 transatlantic service. It is a sister ship to the other ships on the service, and is owned by Seaspan and on long term charter to K-Line. 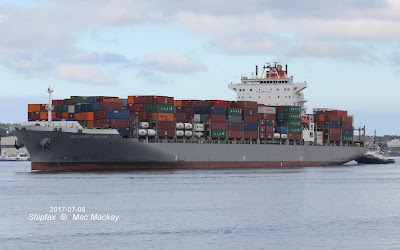 After it entered Bedford Basin it waited off Fairview Cove as NYU Atlas sailed. It is servicing THE Alliance also but on the long haul run which is heavily populated with NYK Line ships. 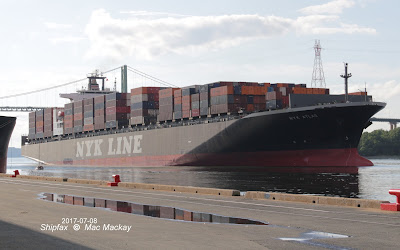 NYK Atlas is trimmed down by the stern - perhaps to reduce air draft - as it transits the Narrows.

Meanwhile alongside pier 9b the tanker Torm Atlantic is ballasted down by the bow for prop repairs. 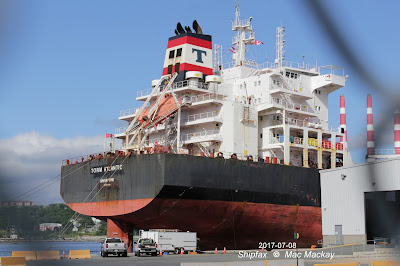 Evidence of hasty renamings on the stern where the original name and port of registry (Majuro) in welded letters are still in place.  Although the ship has the Torm funnel mark it does not (yet) have the orange superstructure of typical Torm tankers.

A Medium Range tanker of 30,221 grt, 49,999 dwt, it was built in 2010 by Guangzhou International in China as Giacinta. In 2015 it very briefly carried the name Maersk Malta, before assuming its current name later in the same year. The ship arrived at Imperial Oil July 4 from Montreal. If it unloaded cargo it may be one of the unnamed ships chartered by Algoma and given temporary coasting licenses to carry Esso products.