The research / expedition / cruise ship Akedemik Sergey Vavilov arrived this morning. It is not listed in the cruise ship schedule for Halifax, but does make yearly visits as it is repositioning from its summer arctic cruises to its winter antarctic cruises.


Built in 1988 by Hollming, Rauma, Finland, it measures 6344 grt, and is a near sister to Akademik Ioffe, built a year later by the same yard. Akademik Ioffe made the headlines this summer when it went aground in the arctic. Fortunately for all, although the ship was holed, it was possible to evacuate the passengers and non-essential crew safely. In fact Akademik Sergey Vavilov was in the same area and was able to respond and take those people aboard. Akademik Ioffe arrived in Méchins, QC today for drydocking.

Akademik Ioffe on an earlier visit to Halifax.

Both ships are ice strengthened to Lloyd's Ice Class 1-A and are owned by a Russian research facility, but their cruising is organized by One Ocean Expeditions of Vancouver. A third ship, and quite a different one, RCGS Resolute will be joining the One Ocean roster later this year. It was built in 1991 (One Ocean says 1993) by the same Rauma yard, is ice class 1AS and can carry 146 passengers. 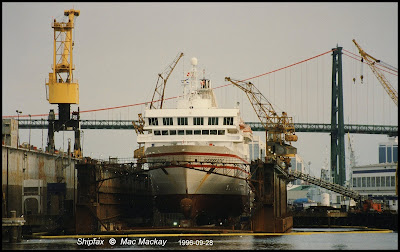 Welders are busy patching up Hanseatic in 1996.

As the Hanseatic it has its own history of grounding in the arctic, following a memorable incident in 1996 on King William Island. It was refloated and proceeded to Halifax where its punctured fuel tanks were patched. It was built as Society Adventurer, but was renamed in 1992. Its new name will include the initials of the Royal Canadian Geographical Society. 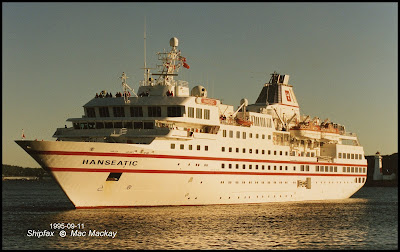 Although now wearing HAPAG colours, Hanseatic carried the Bolten funnel mark in the 1990s.It weill adopt One Ocean livery when it is handed over in November.