The first of the RCN's Arctic Offshore Patrol Ships (aka AOPS 1) , is one step closer to launch this evening. Halifax Shipyard Hull #103 was rolled onto the launch barge Boa Barge 37 in a day long operation. With careful trim adjustments, the operation was conducted successfully and early this evening a crane was lifting off various pieces of equipment. The wheeled transporters, and some of the blue cradles were back on land. Vertical stability pads were being moved into place on each side of the ship to provide balance during tomorrow's float off. 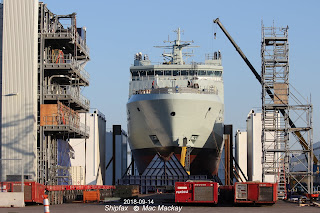 Operations will start early in the morning when the barge is moved to Bedford Basin. Once there the lengthy process of submerging the barge and gradually floating the ship will begin. According to pilotage orders, the ship is expected to be afloat and ready to clear the barge by early afternoon. It will then be moved by tugs,  to pier 8 Halifax Shipyard.

The name Harry DeWolf has been selected for the ship, but until it is actually handed over to the RCN, it remains under control of Irving Shipbuilding, and is without an official name. A naming ceremony is some time away, as handover to the RCN is not scheduled until next summer. (Just in time for some federal election publicity). Commissioning may be some time after that.