When transatlantic liners were outmoded and various other long range passenger routes were rendered obsolete by aircraft, many of the older passenger and passenger / cargo ships were re-purposed for cruising, and went on to sometimes long careers. In my mind those ships were the classics.

Nowadays with most of them gone, there are still  'first generation" cruise ships sailing, sometimes under third fourth or fifth names, and they have now achieved the status of classics, Hard as it is for me to realize that I remember these ships when they were new, I do like seeing them again, still working. Most have far better lines than the new behemoths, which only adds to the enjoyment.

First arrival and first departure was the Fred Olsen Lines Black Watch, a ship that was part of the new wave of luxury world cruising as Royal Viking Star when it was built in 1972 by Wartsila, Helsinki. 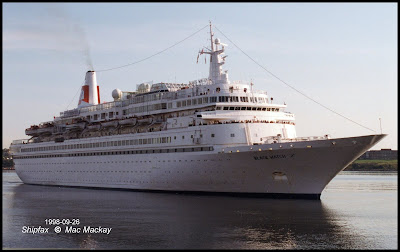 Although it never called in Halifax as Royal Viking Star it was little changed when Olsen initially took over, including the all white colour scheme.


By comparison the Royal Princess at 142,714 grt and 3600 passengers, appears to be a giant, even though it is far from the largest cruise ship in Halifax this year. 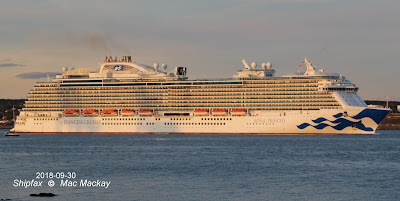 The shadows of several Halterm container cranes fall on Royal Princess as it sails early this evening.

It was built by Fincantieri, Monfalcone in 2013 and sponsored by no less than HRH The Duchess of Cambridge. It first called in Halifax September 24, 2014.


Another (modern day) classic arrived at pier 23 this morning and will spend the night in port,. Saga Sapphire started life as HAPAG's Europa at Bremer Vulkan, Vegesack in 1981.  It has changed hands several times and carried the names 99: Superstar Europa, 99: Superstar Aries, 94: Holiday Dream, 08: Bleu de France and finally in 2012 joining British-based Saga Cruise Lines as Saga Sapphire. From an original capacity of 600 passengers, the capacity swelled under French ownership to 1158 (counting upper and lower berths), but has now settled on 720. 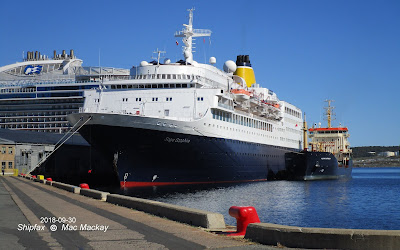 Saga Sapphire at its customary pier 23 berth, takes fuel as Royal Princess towers in the background at pier 22. 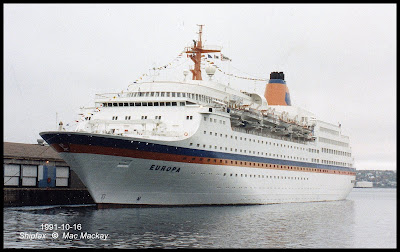 Europa at pier 23, was often the last cruise ship of the season in Halifax.

For the record the other modern ship that called today was Norwegian Dawn, seen in this blog before.