Several hundred attendees at the Port of Halifax annual Port Days event were hardly noticed on the waterfront today amid about 7,000 cruise ship passengers and activities surrounding the G7 Environment ministers meeting at the Nova Scotian hotel nearby.

Aside from an increased police presence, it was pretty much business as usual in the southend of the port. Port Day attendees however were told that the future may look very different - more on that later.

Three cruise ships called in Halifax. As posted yesterday, there was the early arrival of Regal Princess. Since its first arrivals here in 2015 it has had "decorative" painting added to the bow. 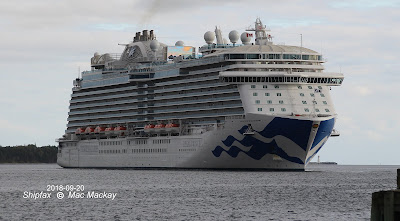 After their usual day in port the regulars Rotterdam and AIDAviva had already sailed when Regal Princess backed out of its berth at pier 22. (This followed a nearly ten minute horn malfunction, that blasted the south end of the city and no doubt polluted the aural environment for the G7 representatives!). 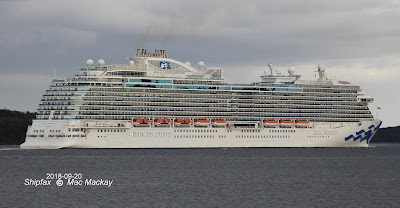 The heavy police presence on the land side of the water front, including dozens of officers on bicycles, was also seen on the water with the Halifax Regional Police boat Garrett Cotter zipping back and forth. 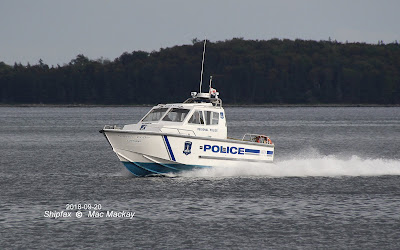 Built in 2004 by ABCO, Lunenburg, NS the 710 bhp aluminum hulled vessels is registered as C07536NS./ Interestingly that registration shows ownership vested in the Halifax Port Authority.
[Although not as famous as the Australian criminal of the same name, this Garrett Cotter was the first chief of Hailfax police, then called City Marshal, appointed in 1864.] 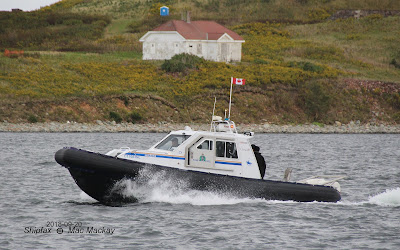 The RCMP was represented with a fibreglas Rigid Hull Inflatable dating from 2015 when it was built by Kantar Marine Inc of St.Thomas, ON. It is registered under C17083NL, a Newfoundland designation, but ownership is shown as RCMP "H" Division, Halifax.

Not to be left out the Canadian Coast Guard  landed a helicopter at George's Island late in the afternoon. However this may have been a normal technician run. 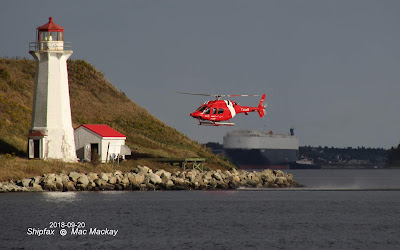 The autocarrier Goodwood was sailing form Autoport, in deep shadow.

The RCN had HMCS Summerside and Glace Bay in the harbour, but this seemed quite incidental too.

See a subsequent post for Port Days coverage.
.
Posted by Mac at 8:05 PM