The cruise ship Star Pride made its inaugural call in Halifax today, but only under its current name. In fact it has been calling here for three decades.

When built by Schichau Seebeck, Bremerhaven in 1988 it was one of the classiest ships afloat. Named Seabourn Pride, its small size (only 212 passengers [new reduced to 208], 164 crew, 9975 grt) and clean yacht-like lines made a mark for Seabourn (managed by Cunard) wherever it went. It was one of the early ships to be named by a celebrity - in its case by Shirley Temple Black.

Its original appearance has unfortunately been marred over the years by several refits. The worst, in the early 2000s, installed individual windows and sliding doors on the upper deck cabins, which ruined the continuity of the clean blue window bands. The inevitable addition of giant Sat Domes can only be written off as a regrettable necessity. 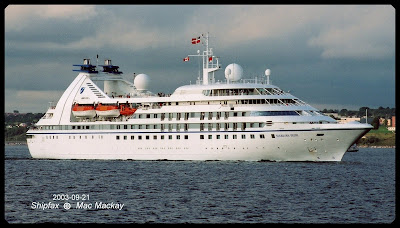 The ship did not lose all its appeal with the addition of "Juliet balconies" and individual windows, but the blue bands lost their effect.

In 2014 when Seabourn sold the ship to Windstar Cruises, there have been further changes.

The complete elimination of the blue bands makes the ship look very chunky, even though the one blue stripe above main deck level remains. The ship continues to be well maintained and is showing few signs of age.