As usual Labour Day Monday was a quiet day in the port with only the cruise ship Veendam at the deep water piers. Things picked up somewhat today - particularly at Halterm.

First in was Asian Sun on its regular visit for Tropical Shipping. It was in port all day, discharging and loading. As Halifax is a terminal port for the line most of the ship's 1119 TEU capacity was unloaded and loaded.  It started calling in Halifax for Tropical in October 2017.

Under the watchful eye of Canadian Border Services, Asian Sun works at pier 42.
Next in line was AS Felicia, also a regular caller, on ZIM's Halifax / Kingston, Jamaica service, where it connects with ZIM's larger ships. 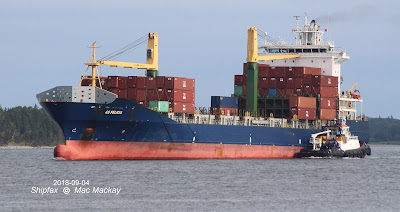 The tug Atlantic Fir makes up stern forward, to prepare to turn the ship for pier 41.


The ship made its first call in Halifax April 3, 2018. Although a major comedown in size from previous ZIM callers, some of which exceeded 10,000 TEU, this feeder service handles as many or more boxes in Halifax as the big ships did.
ZIM however is consolidating its services further in a slot arrangement with the 2M Alliance, (Maersk and MSC). Starting next week ZIM will drop one of its six Asia / US East coast loops in favour of a 3,000 TEU per week slot arrangement with 2M. This will allow the line to shed six Panamax time chartered ships. It has an industry high 90% charters in its 84 ship fleet.

As Asian Sun was preparing t leave Cap Portland was arriving to take its spot at pier 42. Cap Portland is on only its second call in  Halifax. The first was August 1 when it inaugurated the new Med / Montreal Express (MMX) service for Maersk. The five ship service calls in Montreal westbound and Halifax eastbound.

Cap Portland is met by Atlantic Oak off Halterm as it makes its way to pier 42.

Built in 2007 by Hyundai Mipo, Ulsan (yes they build something other than tankers) the 22,914 grt, 28,142 dwt ship has a capacity of 1819 TEU (including 462 reefers) and is fitted with three 45 tonne cranes. It was built as Santa Albano. but was renamed on delivery to owners associated  with CP Offen. 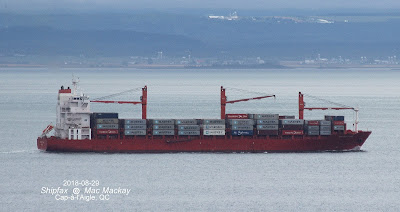 Cap Portland westbound on the St.Lawrence last week, appeared to be loaded to capacity.

Halterm was not the only location for activity today - Autoport resumed operations with the Wallenius Wilhelmsen Porgy. Flying the Liberian flag the 58,752 grt, 18,009 dwt ship has a capacity of 6,284 cars. It is on charter to W-W by Lucia Navigation of Panama. This is a change from original owners Sedona Car Lines Panama SA, which owned the ship until earlier this year. Managers remain Excel Marine Co Ltd.
It was built in 2009 by Toyohashi Shipbuilding in Japan.

There was also some activity at Imperial Oil as the tanker Harbour Feature arrived late Sunday.

Built  in 2011 by Yangfan Group, Zhoushan it measures 11,880 grt and 16,909 dwt, and it operated by Nordic Tankers of Hamburg under the Portuguese Madeira flag. It is one of a number of tankers operating under coasting licenses for Algoma Tankers, and trading between Canadian ports for the season. Algoma has recently applied to extend the license (originally from July 1 - September 30) to November 30 to meet unexpected demand for heavy fuel. 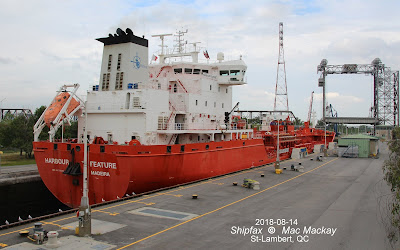 I saw the ship earlier this summer transiting the St.Lawrence Seaway.
Line handlers are no longer needed in the locks, since magnetic suction plates hold the ship alongside during lock filling and emptying.

The ship sailed this evening for Sarnia, ON.
Posted by Mac at 8:25 PM