Far from  a complete rundown of weekend activity - this will have to be a few glimpses.

On Friday the centre section of AOPS 2 (Halifax Shipyard Hull No. 104, future HMCS Margaret Brooke) was rolled out onto the hardstand. This is Megablock #2 of the three sections that will make up the ship, and is by far the largest. 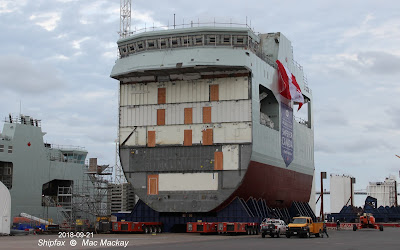 Workers are lowering the (red) transporters so that the (blue) cradles will rest on the ground.

Despite high winds and showers Megablock#3, the stern section, was rolled out Saturday morning and perfectly aligned with Megablock #2. 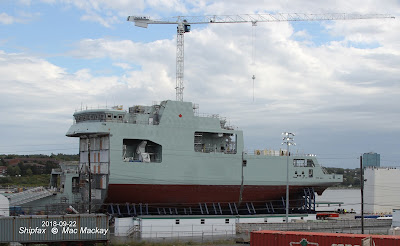 In the case of AOPS1, it was five months before the bow was moved into position.

The ship will likely remain in this condition for some time until the bow section, Megablock#1 is ready for assembly. In the meantime it is much easier for workers to access the innards of the ship.

It was still dark and blustery at 0800 hrs as CCGS Hudson arrived from sea, and it did not attempt to tie up at the Bedford Institute, instead continuing on out to anchor in Bedford Basin.

Hudson bypasses its berth at BIO.

Those high winds caused some interesting moments docking the cruise ships Disney Magic and Adventure of the Seas on Saturday morning. The Disney Magic had tug assistance. However by sailing time conditions had changed considerably and it was a glorious sunny afternoon, although still windy. 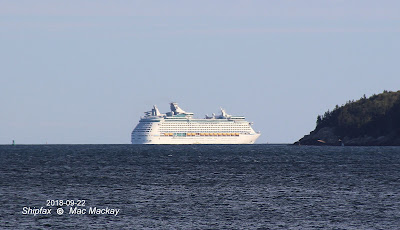 Sailing in the late afternoon,  Adventure of the Seas made a large swing to starboard to create a lee for the pilot boat (which is barely visible alongside the ship).

The product tanker Star N was also due on Saturday, and it was planned that it would anchor in Bedford Basin until its berth at Imperial Oil was free. The Harbour Feature was due at the berth first. Instead Star N remained at sea until Sunday morning, then anchored in the lower harbour. 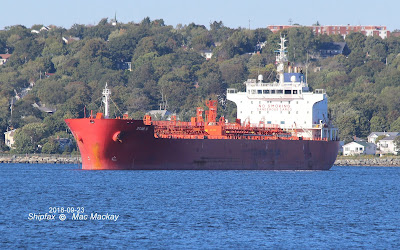 Unlike Saturday, Sunday was more or less dead calm - the anchor is straight up and down.

Star N dates from 2009 when it was built as Mekong Star  by Hyundai Mipo, Ulsan. A handysize tanker of 23,312 grt, 37,836 dwt, it was renamed in 2013 and is managed by Navios Tankers for anonymous owners. Its last port was Milford Haven, UK.

Be sure to read the play by play commentary on the YouTube page.