Of the three cruise ships due in Halifax September 20, one is expected very early in the morning.

Regal Princess will be arriving at the pilot station at 0230 hrs due to a medical evacuation. The transfer will take place at an anchorage in the harbour to avoid docking delays. The ship will move in to pier 22 at 0700 hrs. 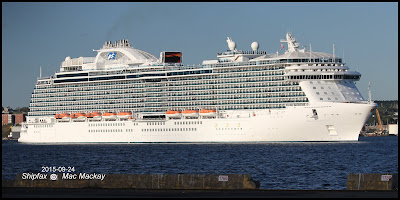 
Rotterdam and  AIDAviva are also due in port. The landside of the port area will be especially busy since it will also by the Port's annual Port Days, with several events planned in the same area where the cruise ships berth.